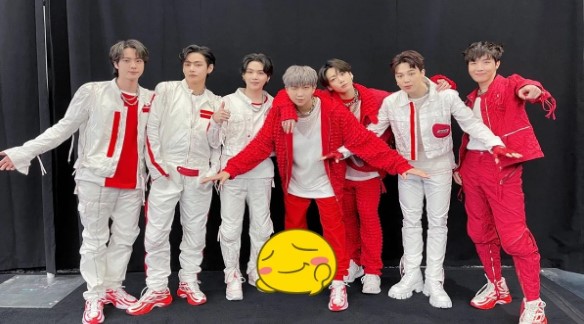 BTS held their second ‘Permission to Dance’ concert date, many fans were able to enjoy this show in the city of Las Vegas at Allegiant Stadium. The members performed their choreography and their biggest hits. ARMY not only enjoyed songs like ‘Butter’, ‘ON’. They also had pleasant moments, here we share the best ones.

The Bangtan boys have had a successful career in music. They have surrounded themselves with popular international stars, as well as reaching important stages within the music industry, for example the occasion in which they presented ‘Butter’ at the GRAMMYs’ 2022.

Without a doubt, this K-Pop band has known how to steal the hearts of ARMYs and their concerts are the best way to show all the talent they have. That’s why we’re sharing with you the best moments from the second date of her ‘Permission to Dance On Stage: Las Vegas’ tour. So don’t miss out on everything.

BTS SHOWS OFF THEIR VISUALS IN LAS VEGAS, THE BEST OF THE SECOND CONCERT

This happened offstage at the concert. The boys of BTS know how to have fun and are always in charge of saying how strong Jungkook is, so Jimin knows how to take advantage of this, since the idol was seen in the arms of the minor, yes! The interpreter of ‘My Time’ loaded Park Jimin like the king that he is.

Bangtan members are very talented, that is a fact, but there is one more thing, they are very handsome! Suga shone with the sight of him during the concert, as his face was broadcast on the LED screens, the idol looked more handsome than ever. Making ARMY scream for the beauty of him. Min Yoongi we are going to sue you for making our hearts explode like this.

V, what a gallant

Not only Suga showed off his beauty. V brought out his best gallant skills, as the idol once again conquered ARMY showing his conquering side. Through the screens we see how Taehyung poses as a drama protagonist who is willing to conquer the person of his dreams.

We know that Jin had surgery on his finger, that’s why the idol couldn’t perform some choreography, but don’t worry, ARMY. Everything is fine. The ‘Wide Awake’ performer enjoyed the show as he took a seat on the stage and watched the members dance on stage.

During the concert goodbye, Jungkook and V took a seat on the floor. They were probably very tired, but the funny thing about this is that the maknae sat on Taehyung’s lap. Sure they are very comfortable, since he seems to be very removed from the pain in his new seat.

BTS concerts are full of moments to remember, as the members take care of making ARMY enjoy every moment. That’s why we saw the performers perform ‘Life Goes On’ on a high platform and in a masterful way, the idols sang this hit.

Surely there are more moments of this K-Pop group, we share five of them with you so that you have also been able to enjoy the show. We hope that very soon BTS will be present in Latin America and thus be able to enjoy these adventures with them. Would you like it?

Among other news. These are some of the K-Pop groups that covered SHINHWA. Find out more.

BTS reveals the real reason why Jimin is called Mochi