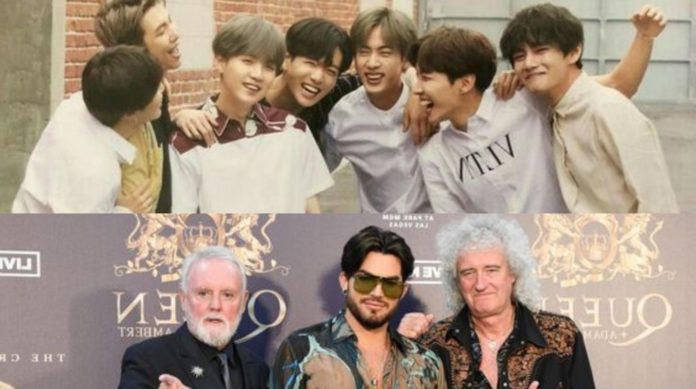 Recently the Kpop has become a global trend, despite the fact that in the early 2000s it was not such a famous genre, thanks to social networks the phenomenon of the Hallyu wave spreads like wildfire all over the world, becoming a trend and becoming very popular.

Hollywood and international stars have joined to follow several groups of the genre, usually, in interviews and press conferences, have expressed their admiration for exponents of the Kpop, on this occasion, the members of the legendary and recognized Queen group and Adam Lambert have talked about his thoughts regarding Korean pop.

Queen and Adam were promoting a series of concerts in the capital of South Korea, Seoul and Yeongdeungpo, on the red carpet of Hyundai Card Super Concert where Bryan May said in the interview:

“I like the Kpop and I am very inspired by its visual appearance, I have heard it, its feelings and arts are unique, it is a new influence, it is important to be inspired by many things, I am sure of that”

Adam Lambert added, that he has seen several BTS presentations and has been impressed by his power on stage and the unconditional support of fans.

Maybe you could think of BTS and Queen have nothing in common, because you’re wrong …

BTS was presented at Wembley Stadium in the United Kingdom, as was the Queen band in 1996, where its mythical presentation of more than 22 minutes in the ‘Live Aid’ remained as an immortal passage in history.

The BTS boys made history by selling tickets for their concert in the stadium in less than 90 minutes, the venue has a capacity of more than 85 thousand spectators, BTS made an iconic presentation during their world tour ‘Love Yourself: Speak Yourself’, The concert lasted more than two hours where fans and spectators were able to enjoy all the energy that overflowed: Jin, Suga, J-Hope, RM, Jimin, V and Jungkook.

The concert was broadcast live over the Internet on a Naver service, on the VLive platform, which received a strong demand from visitors.

Moments as incredible as Jin recreating Freddie Mercury’s famous ‘Eoo’ left fans very excited by the idol’s reference, the BTS boys looked so excited and moved by the moment they were living that they repeatedly came up the tears.

Jungwoo Receives Love From NCTzen on His Birthday