Home Entertainment BTS at the UN General Assembly: “We are the Welcome Generation” 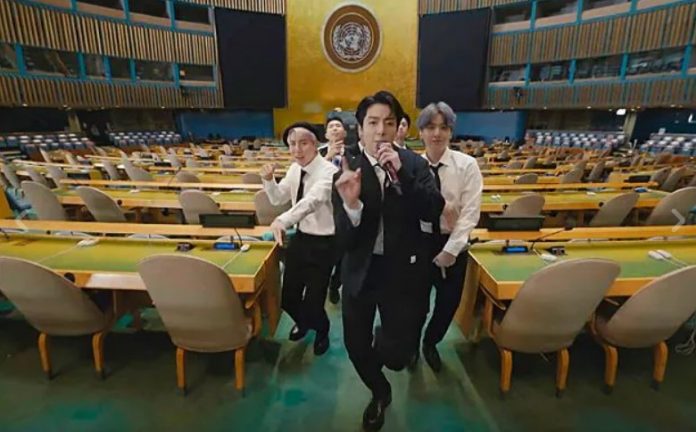 BTS , winner of the MTV Award 2021, participated in the work of the UN for the third time in four years. They danced in one of the most prestigious buildings in the world, sang the anthem of the new generation, “Permission to dance”, appealed against “racial discrimination and hate messages”.

The k-pop group BTS, or Bangtang Boys, staged a show on the first day of the 76th General Assembly dedicated to ‘Sustainable Development’ at the United Nations. The band, the winner of the MTV Award 2021, participated in the work of the UN for the third time in four years. This year in the role of ‘Special Envoy for future generations and culture’.

If Joe Biden kicks off the leaders’ speeches tomorrow, this session of the General Assembly, thanks to BTS, has already recorded the record of online views with nearly a million people who have connected to follow the band adored by fans of K-pop from all over the world.

And from all over the world the super organized online community has connected with the official YouTube site of the UN, leaving a ton of different emojis as an unmistakable signature, to hear its favorites talk about the problems of the younger generations in times of pandemic and exhort the very young to get vaccinated against Covid.

“I have heard that today’s teenagers are called the lost generation of Covid, but I think it is an exaggeration to call them lost, just because the path they have made is not visible to adults,” said the much-followed leader of the BTS. “I think that instead of” lost generation “a more appropriate name would be” welcome generation “because instead of fearing change, this generation welcomes it and keeps moving forward.”

Then an announcement to all the fan community: “All seven are vaccinated, the vaccine is a kind of ticket that allows us to meet our fans and now stand here in front of you,” said J Hope, another beloved star. of the group that has received from President Moon Jae in the post of “special presidential envoys for future generations and culture”. And it was the South Korean president himself, who will speak in front of the General Assembly tomorrow, to present the speech of the band composed of the “most loved artists in the world”. Aside from the million users who followed the event live, tens of millions of other fans around the world immediately started relaunching the news of BTS at the UN on social networks.

"We thought the world has stopped, but it continues to move forward. Every choice we make is the beginning of change."

— @BTS_twt came to UNHQ to support action for the #GlobalGoals & a better world for everyone.

Watch their special musical performance and get inspired. pic.twitter.com/ZQG4pDA61V