Home Celebrity BTS appears in Time Square thanks to Hyundai 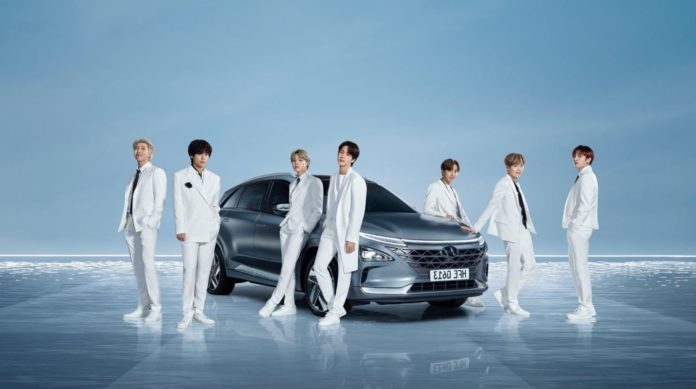 BTS appears in Time Square thanks to Hyundai. The collaborative announcement brought together fans waiting to see the new campaign where the boys from Bangtan participate.

The car brand previously announced that BTS would again be the global Hyundai ambassador group and, along with them, began to share through the networks some photographs of the new campaign that the group would lead alongside the famous cars.

With preparations for the release of Map of the Soul: 7, Hyundai posted the announcement of a new story alongside the Bangtan boys , while sharing photographs of the members with the legend ‘Because of You’. Later he called on the fans of the group to meet in Times Square on the day of the release of the new album , since that same day the projection of a collaborative announcement between the brand and BTS would be revealed .

As the date approached, Hyundai unveiled a dynamic through which fans could win a series of postcards with a brief message written by the boys . To do so, the fans had to go to the point where the ad would be located, follow the Instagram account of @ hyundai.lifestyle and distribute a photo or video of the big screen where the ad would be projected.

D-1 Here’s more details about tomorrow’s giveaway event! 1. Visit Marriott Marquis Times Square, NYC @7-8PM (EST), 21st Feb. 2. Take a photo or video of the massive screen. 3. Follow this Instagram account, @hyundai.lifestyle 4. Post this photo with following hashtags. #HyundaixBTS #Becauseofyou and tag @hyundai.lifestyle 5. Get a chance to win the postcards with each member’s handwriting and their stories inspired from nature. 6. The winners will be announced on 24th Feb on this post with the account tagging (Only ten postcard seekers will be lucky!) ⠀⠀⠀⠀⠀⠀⠀⠀⠀⠀⠀⠀⠀⠀⠀⠀ All global fans are welcome to join. (free shipping internationally) #Becauseofyou #HyundaixBTS #BTSxHyundai #BTSxNEXO #NEXO #Hydrogen #PositiveEnergy #NewYork #NewYorkCity #TimesSquare #0221 #7PM #marriottmarquis

The winners of the contest will be announced on February 24 , but even if they do not seek to win the prize, a large number of fans of the group have already come to see for themselves the advertising of Hyundai x BTS , capturing the moment and showing it in the networks.