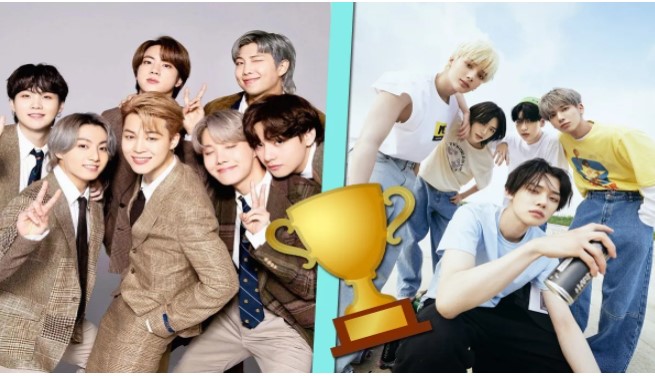 K-Pop idols are present in all social networks, BTS and TXT received some recognition for their important presence in the short video app, what achievement led them to obtain these awards?

HYBE groups have achieved success after success with their music careers, both BTS and TXT have shown that they have powerful fandoms and the music of these K-Pop bands usually reaches high chart positions with each release, however they also They are very popular on social media.

Both groups have profiles on different apps and platforms, so in order not to miss any news in the career of these artists as a group or individually, following them is the best alternative.

Although the figures obtained by the boys of TXT and BTS are staggering no matter what app it is, they just added some awards to their career for their great reach on TikTok, what is it about?

Recently, BigHit announced that both the boys of BTS and the members of TXT have received two recognitions from TikTok, it is nothing more and nothing less than the Creator Awards, of which both K-Pop groups obtained the versions Silver and Golden of the award.

The members of Tomorrow X Together celebrated this achievement by displaying their awards in a video they uploaded to their TikTok group profile and quickly garnered likes and comments from their fans.

BTS AND TXT HAS GREAT ACHIEVEMENTS ON TIKTOK

The fame and popularity of these idols are amazing and they continue to grow every moment, which is why BTS currently has the most followed TikTok account for a Korean act.

Meanwhile, the boys of TXT remain very close and are the second K-Pop boy group with the most followers on their profile. WOW! Do you already follow them on that social network?

In other TXT news, we tell you that Huening Kai had an unexpected interaction with singer Avril Lavigne, what happened?