Home Celebrity BTS and their crosswalk with James Corden, this was the best of... 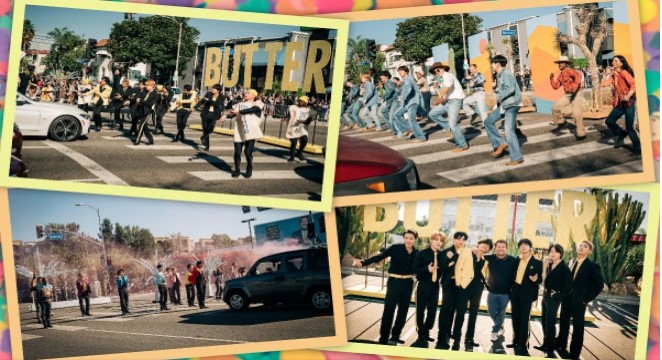 During BTS’s visit to the United States, the boy band had several great activities, one of them was attending The Late Late Show with James Corden where they had a very special show that ARMY was looking forward to seeing.

BTS’s performances are amazing, the idols prepare incredible presentations and shows that ARMY love every time they can witness their favorite group live, anywhere in the world, these artists prepare the best to shine on stage.

Perhaps there is no show that represents a great challenge for Bangtan Sonyeondan as they are all singers and dancers fully prepared to give their best in each performance regardless of any type of condition.

During their visit to the United States, the Bangtan Boys took the stage again with their face-to-face concerts of ‘Permission To Dance On Stage’, but they were not only limited to their shows and were in various programs, festivals and interviews.

One of them was The Late Late Show with James Corden, a program in which they had already been as guests and this time a new challenge was imposed for the idols, to make a concert on the road, while the traffic light was high, BTS would dance and you would sing for the cars, how was your crosswalk concert? Here we have the best moments of this incredible presentation.

Comedian BTS is one of the best, LOL, before introducing themselves, the members of the boy band had certain talks with James Corden, host of the show and in these we could see the most comical side of the artists, the crosswalk concert began with pure comedy .

The first song that Bangtan presented at their crosswalk concert was ‘Butter’, their biggest hit of 2021 that could not be missed, although it was a short version because the traffic light would turn green very quickly and the idols had to run for the cars to pass .

BTS with Butter at the Crosswalk Concert | Twitter: @ssujams

The second song of BTS in their crosswalk was ‘Permission To Dance’, for this presentation even the public joined them to dance it and they walked between the cars, interacting with the lucky ARMY who was able to witness them live: 0

BTS with Permission to Dance at their Corsswalk concert | Twitter: @ BTSupdate_7

The last song of the crosswalk concert was ‘Dynamite’, an already classic of the boy band that shows us their great talents with this explosive presentation.

From gentlemen who had no idea who BTS was to ARMY who could meet this show of their idol favs on the road, the public also shone at the crosswalk concert of Bangtan, LOL, and James Corden selling the ‘official BTS butter’ , you can see the complete presentation and not miss a detail:

BTS’s crosswalk was a marvel, a very fun show but also one that represented great challenges for the idols, who were filled with adrenaline after dancing and running at the traffic light.

In other BTS news, Suga shared her new look and a very interesting activity that she did while on vacation on Instagram.

William and Harry angry: “A lot of suffering and unresolved problems”