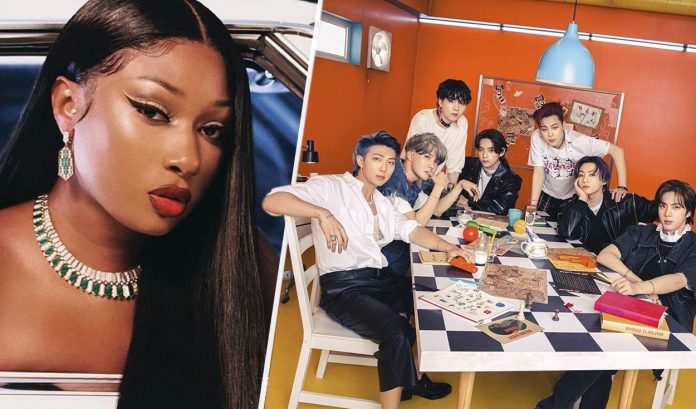 The original version of BTS’s hit was released on May 21 of this year.

PREVIOUS. New lights on the remix of BTS’s “Butter” with Megan Thee Stallion. As Variety points out, a judge would have ruled in favor of the rapper in the case against her record label and Carl Crawford, whom she accused of wanting to block the launch of the collaboration.

The case came to light in an exclusive TMZ report. According to this, the famous 26-year-old filed a petition in court against the 1501 Certified Entertainment company and the executive director Carl Crawford alleging that they blocked the premiere of the song.

The Grammy winner for “Savage” would be the main star of the remix of “Butter” and “would be looking to expand her international fan base thanks to the massive brand of BTS” with this feat, according to the US media. However, she would face sabotage from the label that represents her and her CEO.

As for the reason for the blockade, according to TMZ, Megan argues that the agency is against the remix because supposedly it would not benefit her career; however, basically what they would seek is to obtain a good economic amount to allow the publication (which amounts to 100,000 dollars just for the agency).

In the allegations presented by Megan’s legal defense, the singer considers this pressure by 1501 Certified Entertainment as “extortion”.

Next, we quote what was specified by the medium: “She claims that 1501 told her that they don’t think the song is good for her recording career, but she says that the excuse is just a cover, and deep down the label is trying to shake it up. (…) and force her to pay them to sign the release of the song “.

To the aforementioned report, Variety added that Megan Pete’s petition was filed with Harris County, Texas on Tuesday.

Likewise, this medium detailed that she required “emergency help from the court before this Friday, August 27, 2021, to allow her new music to be released this week as previously proceeded (in reference to the similar case she won in the past against company and CEO) ”, according to the documents he presented.

Variety confirms ruling in favor of Megan
In a latest update, Variety assures that a judge ruled in favor of Megan and authorized the release of the remix, according to a close source whose identity is withheld.

Given this, ARMY hope that official news will soon be given by BIGHIT MUSIC.

The fandom of the acclaimed K-pop septet is one of the most enthusiastic about the remix of “Butter”, because in addition to being a new work by their idols, it will mean an opportunity for the single, originally released with great success in May, get your crown back on the major music charts.

What else is known about the remix of “Butter”?
In the documentation released on the case, there is an email sent by Big Hit in which Megan’s collaboration is requested.

BIG HIT Music announces remix premiere
Just hours after Megan Thee Stallion got a favorable verdict from the court, South Korean agency BIG HIT Music made the next release of the remix official.

According to this teaser, the song will hit all music platforms at midnight on Friday, August 27. By time zone, the ARMY of Peru will be able to listen to it on Thursday 26 at 11.00 p. m.

Megan Thee Stallion on Butter
Naturally, the artist expressed her enthusiasm as her collaboration with BTS was made official following the teaser released by BIGHIT.

“You guys don’t understand how excited I am!” She tweeted herself and added butter emojis.

Due to the latest events, the message was not long in receiving support from the ARMY fandom. It reached more than 260,000 likes.