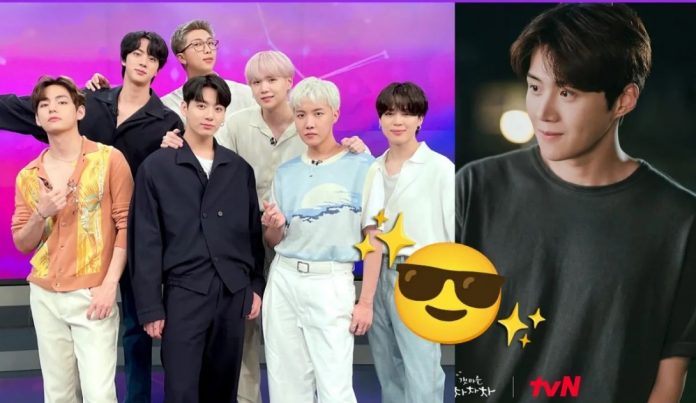 We finally saw the members of the BTS band together with Kim Seon Ho and this is what happened. 2021 has been full of surprises in K-Pop and K-Dramas but we have also had interactions between the most popular stars of the moment, that happened recently with BTS.

Currently, we see Kim Seon Ho starring Hometown Cha Cha Cha with Shin Min Ah, but before this drama had already given us lovely interpretations and one of them gained popularity among fans of Bangtan Sonyeondan , you know of what we speak?

When an actor was part of the cast for Welcome to Waikiki 2 he had a fun scene with Moon Ga Young where he boasts of his past in the music industry, so he tells the girl formerly BTS even called to work in their songs.

Kim Seon Ho gaining more and more popularity every moment, many dreamed that in a not too distant future he and the idols of BigHit could really know, but now it is a reality.

Recently they carried out the The Fact Music Awards in its 2021 edition, members of BTS several awards took and went up to the stage to thank the fans who support them and to receive their trophies.

One of his prizes was delivered by Kim Seon Ho precisely, thrilling everyone who followed the live broadcast of the TMA .

The Korean actor took the stage and gave a few words before entering the award ceremony, after which he announced the winner for the Listener’s Choice award that corresponds to the song most loved by the public throughout the year, naming BTS as the creditor. to recognition.

The brief interaction made many hearts happy and became a moment commented on by fans, especially those who follow the group’s career and Kim Seon Ho.

This Is Us Season 6: The end is getting closer by...