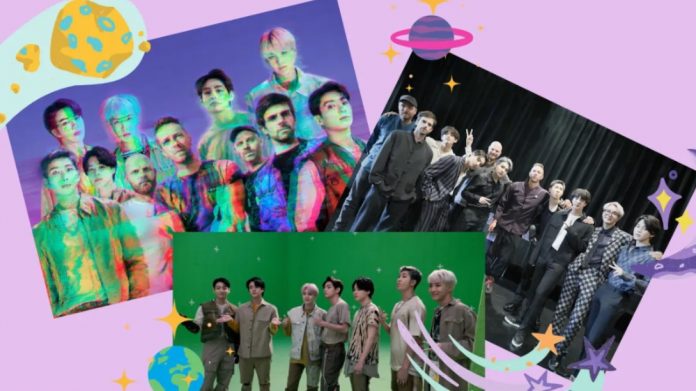 On September 23, 2021, Coldplay released the audio and lyric video of the single My Universe in collaboration with the K-Pop band BTS , on the 29th of the same month they released the official MV of the song and it became an event at the level world.

The production featured special effects, the story took place in space with creatures from other worlds, the idols of BTS and Coldplay interacted with each other thanks to technology and left their fans speechless.

The MV My Universe reached more than 48 million views on YouTube and occupied the top 3 places in the video platform trends, adding 5.5 million likes and thousands of messages in the comment box.

But do you know how the Coldplay x BTS collaboration MV was filmed and all the teamwork from the production? The British band shared an interesting behind-the-scenes look at My Universe.

BTS and Coldplay Showcased Their Teamwork On My Universe Recordings

Through the official Coldplay channel on YouTube, they published a Behind The Scenes of the MV My Universe with a duration of 3 minutes and 48 seconds, in which they showed in detail the characterizations of the characters, the takes of the singers and rappers of Butter in green screen and director’s views.

Dave Mayers , director of the clip, assured that My Universe was about the power of music, how it unites people and inspires others, the premise of the MV was to capture the performances of musical bands originating from different planets enjoying their songs.

RM explained that Chris Martin made My Universe in different cities around the world, flew to Seoul and BTS recorded the song in the studio, highlighting the history of the music video and how well it combined with the message they gave in the collaboration .

Like the recording of the theme, the filming of the MV was done in various places such as Barcelona in Spain and Seoul, in this location they used special equipment for the shots of the GRAMMY nominees, later they added them in the clip.