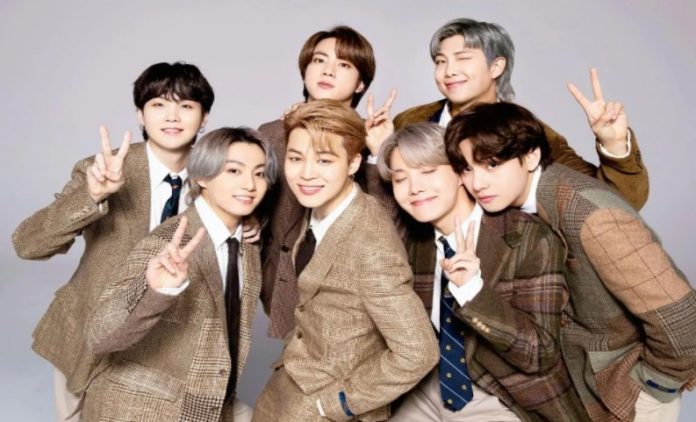 We tell you who of the members of the band BTS is dating someone in 2021, who are the girlfriends of the idols? The boys of BTS conquered the hearts of fans around the world, which is why many fans want to know if the HYBE singers currently have a girlfriend.

For that reason, we took on the task of compiling the romantic stories of these popular idols, their experience in love, old girlfriends and rumors that have been born since their debut in the world of K-Pop.

Dynamite performers are known for their talent on stage, but also for their great charisma and affection for their fans. It is not a surprise that many ARMYS now consider them their ideal type of boy, as the qualities of the BTS members have made them shine to the fullest.

If you want to find out if your Bangtan Sonyeondan bias currently has a girlfriend or has dated someone then you came to the ideal place, learn more about the love life and dating history of these singers.

DO BTS MEMBERS HAVE A GIRLFRIEND IN 2021?

ARMY’s suspicions were raised recently when BTS appeared on a show alongside Lee Hyun, he took on the role of idol manager for a day, and in the clip there was a time when he offered him bottles of water to the boys.

However, ARMY does not miss any details and discovered that the phone that Jin is holding is decorated with a Polaroid of a couple. Although the image does show two people, it is not certain who they are or if the phone actually belongs to Seokjin, so this was not a rumor.

He was also romantically related to famous comedian Lee Guk Joo, but he quickly clarified that they are just good friends.

Hoseok has been free from rumors and suspicions about dating relationships since his debut, but on one occasion he confessed that he previously had a girlfriend, only that the relationship came to an end due to her leaving him for another boy.

During the Rookie King show, he confessed that he previously liked a girl but was a one-sided love. Meanwhile, on the ShimShimTaPa show he said that before he had a SayClub account to chat online and it was there that he received some confessions, did any lead him to romance? In fact, since none was face to each other, he did not go beyond tender comments for the idol.

On the other hand, Taehyung revealed that on one occasion he took courage and confessed his love for a girl via text message, but did not receive any response.

There were also rumors that he dated an ARMY who went by the name Hi. These rumors began because on Twitter he always responded to this user of the social network and if she requested photos, letters and more, he did. For example, when the girl asked V to take a mirror selfie he later posted an image like this, but that would be just one of the many cases fans identified. Internet users suspected that Hi and V had had a trip abroad together, but it was only deductions from some fans.

The BTS member has been linked to dating rumors with different K-Pop stars, including Red Velvet’s Seulgi and KARA’s Seungyeon, but this has been the result of fan comments, not specific evidence. Outside of this he has not commented anything about his experience in love.

In 2014 it was said that the rapper was dating a girl and many thought that she was RM’s sister. Suspicions arose after an internet user posted photos with a boy who was supposedly Suga. To begin with, it was ruled out that it was Namjoon‘s sister because his years of birth did not match, it was never confirmed that the boy in the photos was Yoongi since in all of them his face was partially covered with stickers.

Then in 2017 rumors appeared with the singer Suran, they have worked together on several occasions, releasing songs like Wine and So Far Away, but BigHit Entertainment denied the suspicions and said that they were only colleagues from the music industry.

The BTS leader once confessed that he had a girlfriend during his years as a high school student, but she was a very sociable person and had many friends, so the idol couldn’t help but feel jealous and eventually their relationship ended.

The craziest romantic rumor this idol has ever faced is that some fans raised suspicions that he is already married and even has children, OMG! It all started with a ring that the rapper used to wear, but also because on one occasion he commented that for his future he would like to start a family.

Then he showed on a live broadcast that he bought some baby shoes because they looked cute, but he just wanted to have them as decoration.

Some fans believe that BTS’s maknae and TWICE member Sana have or had a romantic relationship that supposedly started when they both took on the role of special MC on Music Core, but again it was speculation.

He was also romantically related to IU, as the idol said that he was a huge fan and suspicions began. Another girl who was involved in rumors with Jungkook was a tattoo artist named Rennis, although they were seen together, it was clarified that they did not have a romantic relationship.

In addition to that, there were earlier rumors that BTS’s maknae dated a CUBE Entertainment trainee, but this was never confirmed.

Although the members of this idol group are not closed to love, they currently have many activities that do not allow them to have much free time and none of them have declared to be in a relationship.