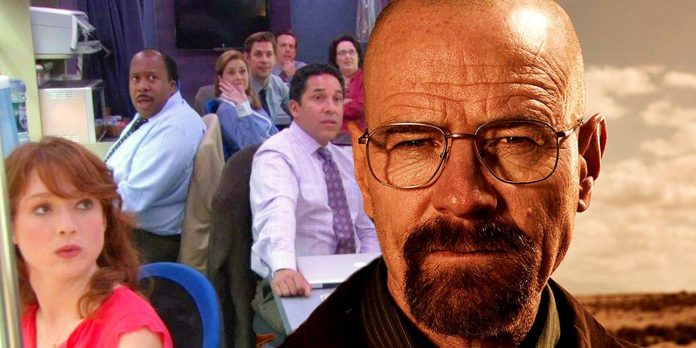 Bryan Cranston recalls filming the dangerous episode “Work Bus” of the TV series “The Office”, during which the actors and crew were exposed to carbon monoxide. The first broadcast was shown in 2005 year – up to season 9 – and ended in 2013. The show was critically acclaimed and became a big hit for NBC, continuing to maintain its popularity on streaming services such as Netflix, and now in a new home – on Peacock. “The Office” tells about the mundane life of a group of employees of a branch of the Dunder Mifflin paper company in Scranton and their childish boss Michael Scott (Steve Carell).

Although it is believed that after the departure of Carell’s character, the quality of “The Office” deteriorated, there are still a number of cult episodes in season 9. This includes the 4th episode titled “Work Bus”, directed by Cranston. In this episode, Scranton employees, including Jim Halpert from John Krasinski, Pam Beasley from Jenna Fischer and Angela Martin from Angela Kinsey, board a bus while the office is being sanitized. Although this episode seemed harmless to viewers, in the book by Fisher and Kinsey, which tells about the creation of the “Office”, it later turned out that due to the placement of the air intake of the air conditioner next to the exhaust pipe of the bus, the actors and crew were exposed to dangerous carbon levels. carbon monoxide during filming.

Related: Explanation of Funny Bob Odenkirk’s Cameo in the Office

In a new interview for “The Late Show with Stephen Colbert,” Cranston reflected on staging the infamous “Work Bus” episode in “The Office,” which Fisher and Kinsey hilariously dubbed “The Death Bus.” The “Breaking Bad” star recalls that it was actually Fischer who first started talking about the smell of exhaust. Cranston joked that if she hadn’t, the entire cast and crew could have died, and the episode would have become an impromptu finale of “The Office.” See Cranston’s full comment below:

“It is unfair that it is called the “death bus” because no one died. I admit it was my goal, but Jenna Fischer actually saved everyone’s life. She said: “I can smell the exhaust coming inside the bus.” I say, “Jenna, I mean, how is this possible? It’s impossible.” And she says, “No, he’s coming in!” So I took a chair, stood on this thing and stuck my nose in there, and of course it was billowing down It was carbon monoxide I wasn’t completely sure, so I took a second breath, I got some more. I felt good and dizzy, and then I realized: “My God, we could all have died.” It would be a hell of an episode. It would have been the finale before they planned it.”

Fortunately, none of the Office team was seriously affected by carbon monoxide exposure, but Cranston’s story portrays Fischer as the hero of the day. Although it’s easy for the actors of “The Office” to joke about it now, all these years later, the incident really speaks about the dangers of working on the set and about small decisions or missteps that can eventually lead to disaster if they are not caught in time. enough. Although “The Work Bus” itself is not necessarily one of the most famous episodes ever created by “The Office,” the drama unfolding behind the scenes has certainly made it much more memorable.

It is likely that if Fischer had not spoken, someone else would have done it in the end, as soon as the actors and crew began to show symptoms of carbon monoxide exposure. However, Fisher’s quick wit eventually prevented the situation from getting worse and helped ensure the safety of her friends and colleagues. Even now, almost 10 years after the finale of “The Office” aired, the show remains incredibly popular, and talk of a revival series continues. While it’s unclear if more “Office” will ever be implemented, if any revival does happen, it’s likely that safety will become a top priority after a close conversation with the “Work Bus.”

Every Ice Cube Movie on Netflix