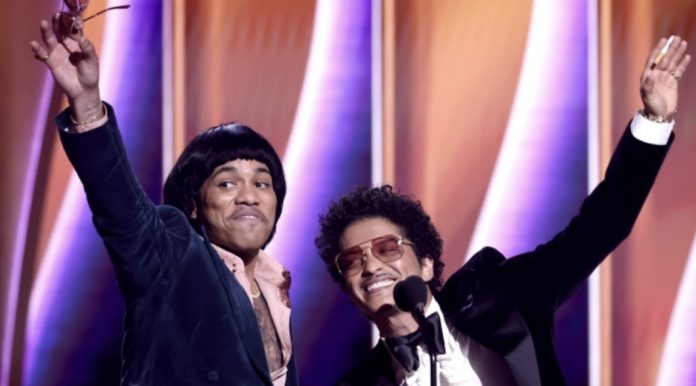 Bruno Mars announced today that he and Anderson.Spider, known by the duo Silk Sonic, will not submit their album An Evening With Silk Sonic for consideration at the Grammy Awards.

The album was expected to be the main contender. Mars reported this to Rolling Stone magazine.

“We really put everything into this album, but Silk Sonic would like to gracefully, humbly and, most importantly, sexually refuse to present our album this year,” Mars said. “We hope that we will be able to celebrate the great year of music with everyone and take part in the party. Thank you for allowing Silk Sonic to flourish.”

Silk Sonic has already received four Grammy Awards for one of the songs from the album — the single “Leave the Door Open”, released in April 2021. This record, among other awards, was named “Single of the Year”.

The album was released in November 2021 and could receive awards at the 2023 ceremony.

Mars told Rolling Stone, “We’d be crazy if we asked for anything more. Andy and I and everyone who worked on this project won at the moment when the world reacted to “Leave The Door Open”. Everything else was just the cherry on the cake. We thank the Grammys for allowing us to perform on their platform — not once, but twice — and for awarding us at last year’s ceremony.”

Other contenders for the title of “Album of the Year 2023” are likely to include Kendrick Lamar, Adele, Harry Styles, Beyonce and Taylor Swift.

The Grammy Award ceremony will take place at Crypto.com Arena in Los Angeles on February 5, 2023.

Ticketmaster apologizes for the Taylor Swift ticket saga and the “terrible...