Home Entertainment Bruce Springsteen Will Play in Three Episodes of The Tonight Show Next... 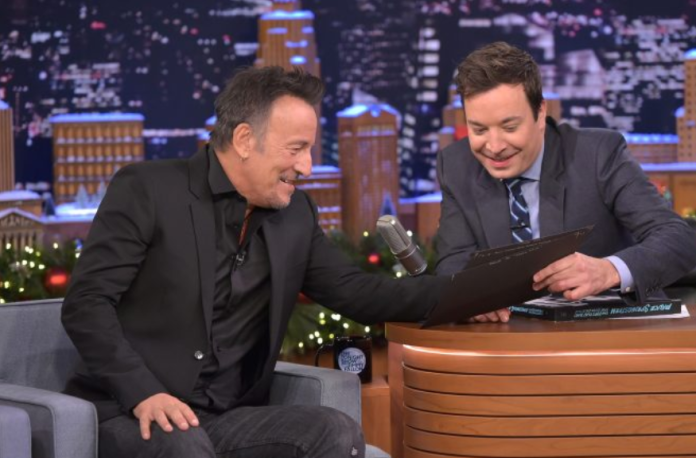 Bruce Springsteen will take part in three consecutive episodes of The Tonight Show next week in support of his new album of covers Only The Strong Survive, as well as a special Thanksgiving episode later this month.

The boss will begin his appearance on the show on Monday evening (November 14), return the following evening and finish his work on Wednesday (November 16). Springsteen will play four songs from “Only The Strong Survive” for three episodes, and will also be the show’s lead guest, participating in segments alongside host Jimmy Fallon. Springsteen will then return to the show on November 24 in the Thanksgiving edition.

Springsteen and Fallon have worked together many times. He performed on “Late Night” when Fallon hosted the show several times, including a parody of “Born To Run” about former New Jersey Governor Chris Christie associated with Bridgegate, and a cover of Willow’s “Whip My Hair” when Fallon impersonated Neil Young.

Springsteen has appeared on The Tonight Show three times since Fallon took over hosting duties in 2014, but never as a musical guest, but only as an interviewee.

“Only The Strong Survive”, a new collection of Springsteen soul covers, is due out tomorrow (November 11). In a four-star review, NME said that on the album, Springsteen “revives this classic as a means of celebration, pointing out some of the strongest songwriters and vocalists of all time with 15 huge and heartfelt tributes.”

“Not only does he shed light on what inspires one of the greatest living American songwriters, but he also helps preserve the great men of the past and ensures that the best music and stories continue to live.”

Springsteen and the E Street Band will tour the UK, Europe and North America next year, and The Boss will reunite with his legendary backing band for their first tour together since 2017. The tour will start in Tampa in February and continue across the USA. until mid-April. The European and British stages will begin with a couple of concerts in Barcelona at the end of April and will end in Italy by the end of July.

On Monday evening (November 7), Springsteen performed his annual performance of songs and jokes at the Stand Up for Heroes charity concert in New York. Springsteen has played in almost every edition of the annual event, which benefits the Bob Woodruff Foundation to support charities and programs for U.S. veterans, since its founding in 2007.

During his set, Springsteen played “House of a Thousand Guitars”, “I’ll Work for Your Love”, “See You in a Dream” and “Dancing in the Dark”. He also peppered his set with obscene witticisms. “During sex, you burn as many calories as if you ran eight miles. But who can run eight miles in 30 seconds?” he said earlier in the evening, before adding that he “learned it from the Internet.”

Flash finally has a super-pet (and he’s strangely perfect)

PlayStation reaffirms desire to bring exclusives to PC with Nixxes