Home Entertainment Brothers in arms: Did they really liberate the concentration camp? 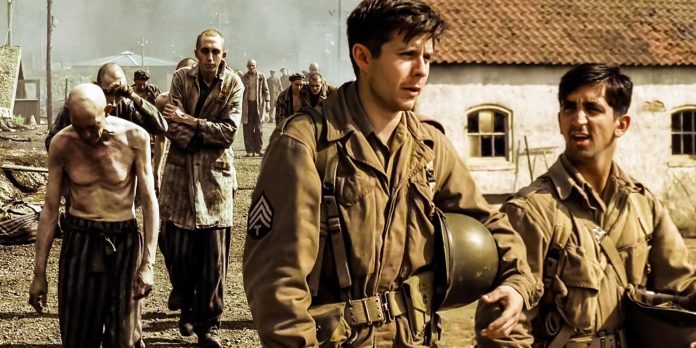 In Band Of Brothers, Easy Company discovers a concentration camp abandoned by the German military and frees the poor souls inside. Episode 9 is one of the best in the series because of how impressive it is. In a program known for its realistically grim depiction of World War II, the liberation of the concentration camp stands out as one of the most harrowing moments. Band Of Brothers is based on the real exploits of the soldiers it portrays, as told in Stephen Ambrose’s historical book of the same name, but some of them are fictional to better tell their story. For example, some of the battles in which Easy Company participated are omitted for reasons of pace. However, the liberation of the concentration camp really happened, just not quite as it is shown in the series.

In the 9th episode of Band of Brothers, “Why We Fight,” Easy Company travels to Landsberg, Germany, to observe the surrender of 300,000 German soldiers. While patrolling a nearby forest, several soldiers stumble upon a concentration camp. Winters and Nixon soon arrive to see the horrific conditions the prisoners are in. One of them, translated by Liebgott, informs the soldiers that all the prisoners are Jews, and the German army considers them “undesirable”. It’s easy to understand why some American soldiers hated their enemy, such as Speirs, who was rumored to have killed Nazi prisoners. All the men and women in the camp are severely hungry and dehydrated, but the battalion doctor informs the company that they must be closely monitored during recovery and cannot just eat or drink as much as they want. Thus, the company is forced to order the survivors to stay in the camp so that they do not leave without proper medical care. There are a lot of corpses scattered around the area, and later it was decided that the local Germans would be forced to exhume and dispose of the bodies. It is also mentioned that a few weeks before, the Russian army liberated a larger camp, most likely Auschwitz.

Members of Easy Company are surprised by the existence of such a concentration camp. This is based on reality, as there was often little information and it was easy to confuse it (episode 6, “Bastogne”, where the plane shoots at its people). There were no specific missions to liberate the camps, with the possible exception of the rescue operation of the Swedish Red Cross White Bus in April 1945, and therefore any liberation was the result of chance. Those involved in the liberation probably did not know in advance that the camps existed at all. The 101st Airborne Division of the US Army did find the concentration camp, finding about 500 dead prisoners there. The US Army did order the local German population to bury the dead in the following days.

However, in fact, the camp was discovered by the Screaming Eagle detachment along with the 12th Armored Division, who got there first. This is just one of the things that Band Of Brothers doesn’t mention in its history. The units arrived at Kaufering IV, one of 11 camps in the Kaufering complex in Landsberg, on 27 and 28 April 1945. It once housed more than 3,600 prisoners in inhumane conditions. When the SS heard about the approach of the US army, they sent most of their prisoners on a death march towards Dachau. They also set fire to the barracks to prevent the liberation.

It’s easy to see why Band Of Brothers portrays Easy Company discovering the camp, as they are its main focus. The liberation of the concentration camp is worth including — even if the show slightly distorts the truth to include it — because it demonstrates the very real horror of such places. The Holocaust must never be forgotten, because it must never happen again. The show deliberately invents some aspects of its story and even makes mistakes, such as when it changes Blythe’s death and incorrectly says he died in 1948. However, it remains true to the experience of the war and is generally accurate, at least in the adaptation of the book it is based on.

Marvel Studios Has More Than 30 Projects In Development Between Films...

Evil Dead: The Game Is Delayed Until May