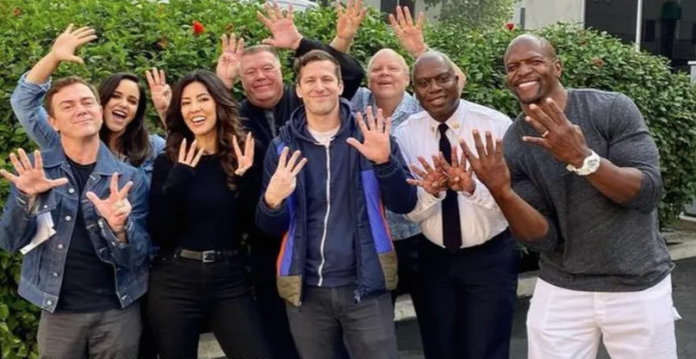 It had started earlier in the year but was halted due to the COVID pandemic.

Samberg, who plays hapless detective Jake Peralta on the show : “We started shooting, then we closed. So we are waiting to come back.

“We are expected to return in the near future. There are a few factors going on – the surge in numbers (COVID) in Los Angeles is significant.

“There is continuity in the people and the stories and the set becomes its own organism and you don’t want to disrupt that. I think you can (lose some momentum), and we’ll know when we come back. ”

Brooklyn Nine-Nine Season 7 drops on Netflix in the UK on March 26, but fans are already clamoring for details on the next episode – which the show’s creators say will cover heavy topics – such as the Black movement. Lives Matters and how it might affect the New York cop district where the show is set.

But since its announcement last summer, filming has been stalled as the pandemic swept across the United States.

The show wasn’t even ready to get a seventh or eighth series, after being dropped by Fox. But fan protests led NBC to pick it up, promising to encapsulate all ends.

Samberg said he was “flattered” the show was so popular in the UK.

“We’ve heard that it works really well in the UK which is so exciting for me. And we’ve said over and over, “we have to go out there”. And I would love to.

“I try to see British comedy shows. I am a big London Toast fan. Matt Berry is the best. I love Ricky Gervais. Of course, I would do something with him.

“I did Cuckoo for BBC Three and I have British comedy and the time I spent in London. It’s really flattering that Brooklyn is so popular there. “

Covid-19 test requirement was brought to those next to Trump