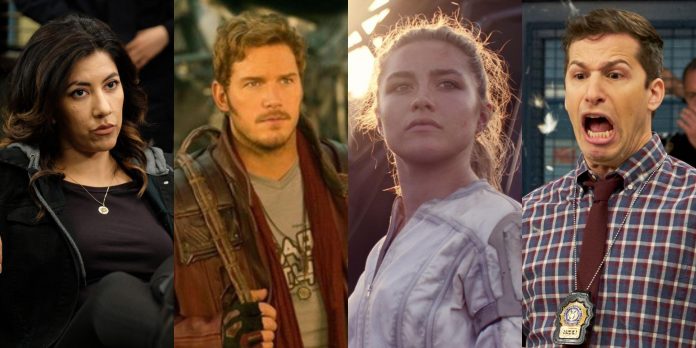 Although Phase 4 of the MCU hasn’t really given fans a lot to laugh about, given that it has been defined by producer Richie Palmer as one of “guilt and consequence” (via The Direct), the trailer for She-Hulk does hint that the franchise may be returning back to the feel-good comedic era that audiences initially fell in love (with Jennifer Walters already proving to be a hilarious presence). What’s more, it also seems like there could potentially be a crossover at some point, with several other iconic characters making an appearance alongside her.

Crossovers can be quite exciting if they’re executed right. However, given that the multiverse now exists, it’s a shame that the MCU would never consider crossing over with non-Marvel entities like Brooklyn Nine-Nine. It’s not like they wouldn’t fit well with each other either since they both have the most emblematic and comic characters in popular culture. It would be quite hilarious to see if there was a universe out there where the characters from Nine-Nine have actually taken the place of some of the MCU’s best heroes.

Kevin and Stephen are both intellectual men. Kevin is a professor of Classic Literature at Columbia University and he’s very proud of his artistic sensitivity and his superior knowledge. Before injuring his hands in a car accident, Stephen was a doctor with a doctorate in neurosurgery who constantly did research work to widen the horizons of his area of study.

However, even though these two characters have brilliant minds, they’re often incredibly arrogant. Both believe their superior intellect makes them better than everyone else, often being victims of their own hubris. Still, these characters come to see the error of their ways and gradually become more appreciative of the people around them.

These two characters may look very different, mostly because Drax is one of the most ruthless characters in the MCU and Hitchcock is a lazy hedonist cop. However, they both have a lot in common. Not only do Drax and Hitchcock struggle with their social skills, but they are often the punchline of many jokes.

They are also the more spontaneous members of their groups, with both characters always jumping into action or taking a variety of risks without thinking of the consequences. While they can be more trouble than they’re worth, in the end, their groups wouldn’t get rid of them since they prove to be extremely loyal assets.

Scully is one of the funniest side characters of the show, and Korg is clearly the comic relief of the Thor movies. However, these characters are also kindhearted and sensitive people. Both are also more complex than is seen by the naked eye. Scully, for example, can surprisingly sing opera, and Korg is usually wiser than people give him credit for.

Although Scully and Korg are underestimated, they’re extremely loyal to their best friends. They could practically be the same person if it wasn’t for the fact that Korg always tries to help the team, whereas Scully is unfortunately usually more focused on finding food.

Just like Darcy, Gina Linetti is known for her acute sense of humor. Both characters use sarcasm to deal with their realities, and even though they may appear to be mean sometimes, they are incredibly loyal to the people they love. Furthermore, their hilarious jokes make their appearances legendaries, with Gina responsible for some of Brooklyn Nine-Nine’s best quotes.

Even if they’re both secondary characters who are mainly assistants to other more powerful people, Gina and Darcy are crucial to keeping the people around them grounded. On top of that, the fans really appreciate the comedy they bring to their respective shows.

Both Thor and Terry are ferocious leaders who do everything in their power to protect the people they love. Even though these characters sometimes have low moments, they often spend time trying to overcome these emotions before they are fighting again. They’re both powerful in their own contexts, but they also always try to use their power for good.

However, the most important thing they have in common is their big hearts. Terry and Thor may look indestructible on the outside, but in reality, they are deeply caring individuals whose feelings are very easy to hurt.

Charles if one of the most beloved characters from Brooklyn Nine-Nine, and Happy, as well, is one of the best supporting characters in the MCU. Both Happy Hogan and Charles Boyle work in security. The only difference is that Charles is a cop in the Brooklyn 99 precinct, and Happy is Tony Stark’s personal bodyguard.

However, in spite of their jobs, these characters are affable, gentle, and funny. Still, people who underestimate them due to their soft exterior would make a big mistake. Happy and Charles do have giant hearts, but they will destroy whoever threatens the people they love and they have the skills to do it.

Even though Stephanie Beatriz would like to play America Chavez’s role (as she shared in a Tweet), many fans would agree that her character, Rosa Díaz, is more like Yelena Belova. Both Yelena and Rosa have the skills to kill people and they’re not afraid to show them. Despite what they’d like the world to believe, they are also kind and caring individuals.

Rosa and Yelena had a difficult life that made them defensive of other people’s intentions. However, even if they try to not get attached to anyone, they constantly fail. Rosa ends up caring deeply about everyone in the precinct, and Yelena, even though she’s a trained assassin, loves Natasha fiercely and grows to care about Kate Bishop and Clint Barton.

Nick Fury is a former Colonel who became the director of S.H.I.E.L.D and the founder of the Avengers. Raymond Holt also works protecting people and is a former NYPD Lieutenant and Captain of the 99th Precinct, presently working as NYPD Deputy Commissioner.

RELATED: Which Animal Would The Characters Of Brooklyn Nine-Nine Have As Their Harry Potter Patronus?

These characters have more in common than their superior ranks. Both Fury and Holt are pragmatic and logical leaders who don’t get carried away by their emotions, as they take very seriously their duty as leaders and world protectors. However, despite their cool exteriors, they grow to care deeply for their respective teams.

Despite their age difference, Amy and Peter have a lot in common. Both Amy and Peter work very hard to impress their superiors: Amy wants to be the youngest person to become Captain, while Peter wants to be considered as the next member to join the Avengers.

On top of that, they’re very studious and intelligent. Even if Amy is a little bit nerdier, Peter also cares a lot about his education, trying to get into a good college in the last Spider-Man movie. Additionally, Peter and Amy are deeply love their pop culture, Peter is a big fan of the Star Wars movies, and Amy loves the Harry Potter books.

These two characters couldn’t be more alike. In spite of a difficult upbringing, they’re both cheerful, confident, and positive people. Furthermore, Jake and Peter have a great sense of humor and constantly make sarcastic remarks. They’re also very interested in popular culture: Jake is obsessed with action movies, especially his all-time favorite Die Hard, and Peter loves listening to 1980s music, an inherently important part of his Earthly traditions.

Although Peter Quill is more morally ambiguous than Jake Peralta, ultimately both characters have the best intentions at heart and they care deeply about protecting the world. Even when they are reckless and impulsive, they’re always trying to be the best version of themselves.