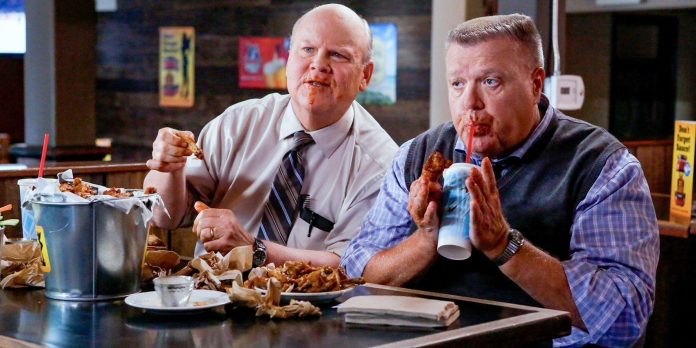 Food is a recurring theme throughout Brooklyn 99, and it holds deep meanings for three members of the squad. Many episodes of Brooklyn 99 feature Hitchcock and Scully covered in some sort of condiment, but this is far from the only food-related gag in Brooklyn 99. In fact, there are much subtler messages contained in the show regarding other characters’ approaches to eating beyond superficial humor.

The Brooklyn-based police sitcom follows a squad of NYPD detectives fighting crime in New York, beginning in 2013 and ending in 2021 after an impressive eight-season run. Over the course of its run, the Brooklyn 99 detectives’ private lives are explored just as much as their careers. From the Brooklyn 99 Thanksgiving dinner that Amy ruins by swapping salt for baking powder and Jake’s steak-filled bachelor party, to Rosa’s use of lemons for a pop of yellow in her kitchen and Terry’s confessed obsession with yogurt, food is integral to Brooklyn 99. However, certain characters’ relationships with food also reveal a lot about them.

Charles Boyle (Joe Lo Truglio), Jake Peralta (Andy Samberg), and Raymond Holt (Andre Braugher) are all secretly represented by the food they eat in Brooklyn 99. Boyle’s adventurous food choices demonstrate his desire to stand out. Peralta uses foods from his childhood as a crutch to retain immaturity, while Holt prefers plain foods to remain unnoticed. Here’s what can be learned from looking at what Boyle, Jake, and Holt eat in Brooklyn 99.

Boyle’s Adventurous Palette Is The One Area He Can Shine

A key feature of Boyle’s personality is his agreeability. He is constantly overshadowed by Jake, and this dynamic becomes the norm. When Boyle is offered a place on a task force instead of Jake, the latter responds with a tantrum. However, much of this personal domination is self-inflicted; Boyle is always the first to sing Jake’s praises and the last to sing his own. Food, therefore, becomes the one place where Boyle can be his own distinct person without becoming secondary to another member of the Brooklyn 99 squad.

The rest of Brooklyn 99’s ensemble cast is frequently disgusted by Boyle’s food choices. He is no stranger to sucking bone marrow from a hoof in the lunch room at work, and his methods for tasting are unusual as well. While eating cuisine as commonplace as pizza, Boyle ensures he has a spit-bucket to hand and cannot resist commenting on “mouthfeel” because: “The inside of your cheeks is very sensitive. It’s like the inside of your thighs except with a tongue.” He seems to relish putting off his colleagues. This is because food becomes his unique strength in an environment where he is always second best, and by eating foods that no one else will, Boyle carves out a niche for himself away from Jake’s shadow.

For an adult, Jake has worrying eating habits – and his diet becomes a running gag throughout Brooklyn 99. Terry, for example, asks Jake when he last ate a carrot, to which Jake replies: “It’s my least favorite type of cake, so rarely.” Especially in the show’s earlier seasons, Jake is content to eat candy for breakfast and packs exclusively blue drinks for a road trip. However, his diet does mature as his relationship with Amy progresses. In Brooklyn 99 season 4, he brags to her, “Love has made me smarter. Remember last week when I boiled that egg?” Yet, before this relationship, his food choices are deliberately immature.

Related: Brooklyn 99: How Long Jake Was Undercover For (Is It A Plot Hole?)

Jake often talks about his difficult childhood. With his father gone, he was forced to grow up prematurely – at least in some ways. Jake Peralta, therefore, is older than he acts and is obsessive over candy because he is trying to capture isolated happy moments from his childhood. This is also why Sal’s, the pizza restaurant that burns down, is so important to him, as well as a Thanksgiving tradition where he eats “MayoNuts spoonsies” on his own. Each of these foods are examples of a self-imposed immaturity. For his character to develop into a rational adult, Jake eventually learns to let go of his old crutches. They are central to his identity, but Jake is able to surrender his habits and traditions when he falls in love with Amy, showing his immaturity toward food was always a conscious decision.

Holt Eats Plain Food To Not Draw Attention To Himself

“I have zero interest in food,” Holt announces to Boyle, shattering the latter’s hopes of having a shared interest. However, this isn’t strictly true. There are many inconsistencies in Holt’s verbal outcries compared to his private moments. For example, when Holt mentors Amy, he admonishes the idea of eating eggs for breakfast, but later in the show says to Kevin, “Someone had pepper on their eggs this morning.” Notably, this inconsistency is public in one case and private in the other.

Holt has always been discriminated against throughout his career. Brooklyn 99 often draws attention to the struggles a gay black police officer would have faced in the 1970s in New York. Therefore, Holt’s public disinterest in food is a front but not a reality, unlike Holt’s hatred for Madeline Wunch. When he feels comfortable, he tries things other than the “flavorless beige smoothies” he claims to desire. Additionally, he has a snobbish attitude towards alcohol and does not try to hide the fact that he’s a wine connoisseur, but this only becomes apparent when he’s not at work.

Holt’s feigned preference for plain food, therefore, is a defense mechanism against the system that has oppressed him. As Brooklyn 99 progresses, he is shown trying new foods inside the precinct, such as the “marshed-mallow” the squad gives him. Holt, who inspired a classic action movie, has always been open about who he is but keeps other personal information close to his chest. By gradually disclosing a broader palette, Holt secretly reveals how close he feels to the squad. Food might be the punchline of many running jokes in Brooklyn 99, but it can also be extremely telling about who the characters really are.

You can get into your Hogwarts Heritage House right now