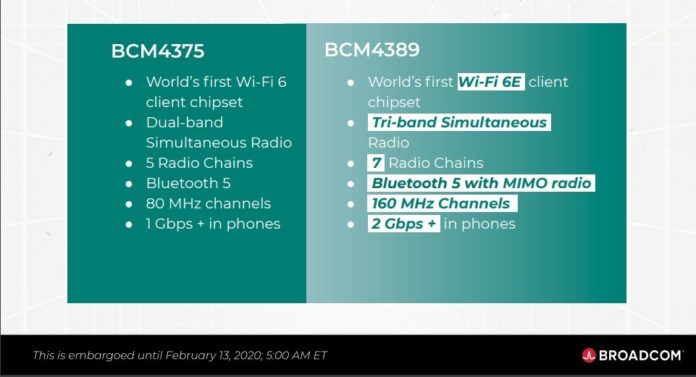 Broadcom, one of the biggest names in the semiconductor market, introduced the world’s first Wi-Fi 6E chip, called BCM4389. The chip, which supports the 6GHz band, promises to double the Wi-Fi speeds.

Promising faster data speed, minimum latency, improved battery life and less network congestion for all wireless devices, the Wi-Fi 6 standard was announced in September of last year. Wi-Fi 6, also known as 802.11ax and has four times the capacity of its predecessor, makes a lot of sense especially for wireless connections and Internet of Things (IoT) devices offered in public places.

Nowadays, when we are just getting used to the Wi-Fi 6 (802.11ax) standard, Broadcom introduced the world’s first Wi-Fi 6E chip, called BCM4389. Wi-Fi 6 currently works on the 2.4GHz and 5GHz bands; however Broadcom’s Wi-Fi 6E chip supports the 6GHz band, which will be operating soon.

Broadcom claims that the 6E chip will cut the latency on mobile devices and double the Wi-Fi speeds. The 6E also supports 160Mhz channels and 2Gbps speed. Indicating that the 6E will improve the mobile AR and VR experience and provide ultra high definition video streaming, the American company says that all this will happen with much less battery consumption.

The Wi-Fi 6E chip, called BCM4389, does not allow interference compared to BCM4375 and provides twice the speed of Bluetooth pairing. Wi-Fi 6E looks absolutely impressive with what it promises; however, we need to wait a little longer to take full advantage of this. It is not yet clear when smartphone manufacturers will start using this new 6E chip.