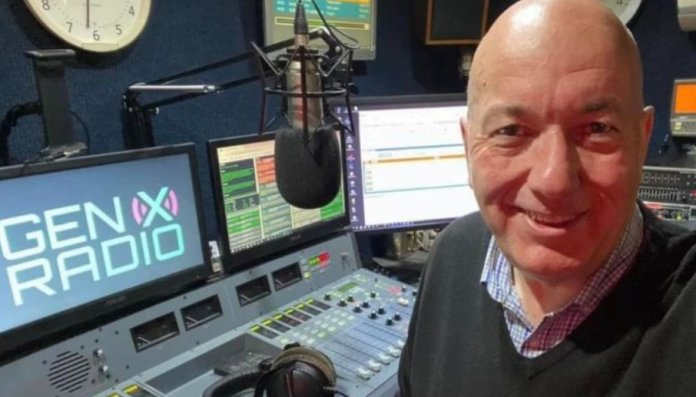 The 55-year-old presenter is believed to have died of a heart attack in the middle of a song during his program, which he broadcast from his home 35 miles from the station’s Ipswich headquarters (via Mixmag).

GEnx Radio Suffolk, launched earlier this year, posted a statement on Twitter. “It is with a heavy heart that I must inform you that our dear friend and breakfast host Tim Gough passed away this morning while presenting his program,” the message reads.

“Our love for his family, son, sister, brother and mother. Tim was doing what he loved. He was 55 years old.”

The TV presenter, who grew up in Suffolk, was playing music on his show yesterday, which stopped around 7:50 a.m. and continued a few minutes later.

It is with the heaviest of hearts that I have to inform you, our dear friend and breakfast host Tim Gough passed away this morning whilst presenting his program.
Our love to his family, son, sister, brother and mum.
Tim was doing what he loved. He was 55 years old.
RIB buddy. x

Gough’s career in radio began almost four decades ago at Radio Orwell in Ipswich in 1986. He has also worked on stations such as Smooth Radio and Saxon Radio. He took a break from his radio career for more than a decade before resuming his radio career at GEnx.

James Hazel, managing director of GEnx Radio, said via Mixmag: “To know Tim personally, as I have done very intimately for over 30 years, meant to know a warm, caring, funny guy whom my family and I loved very much. We are heartbroken by the news.

“I know his family is extremely comforted by the hundreds of loving messages that have been received and they have asked for privacy at this devastating time.”

Tim Foster, who worked with Gough at Radio Orwell and worked for BBC Radio Suffolk, said: “I first met Tim when he was working behind the scenes on a Saturday afternoon sports show.

“We immediately found a common language, and for all the time that we worked at Radio Orwell and Saxon Radio, the jokes did not stop. He was a Norwich City fan, so the rivalry and humor were brutal!

“He did a great job on the Saxon broadcast — his big personality shone. I am so sad to hear about his sudden death, which deprived Suffolk of one of the nicest guys.”

One of Gough’s colleagues, Mark Ely, wrote on Facebook: “The very talented Tim Gough from our Breakfast show, unfortunately, passed away this morning doing what he loved.

“Today is really a very sad day for radio and everyone who was lucky enough to know Tim. My thoughts are with all of you as we come to terms with this huge shock. I speak for everyone at Gen X Radio Suffolk when I say thank you for all your kind messages and outpouring of love and support. I know the team, we really appreciate it.”

“Tim leaves behind a huge hole that cannot be filled, and we are all in shock.

“In the short time that I have known him, his talent and passion for radio are clearly visible, as well as the enormous knowledge and support that he provides to others. I’ve learned so much from Tim.”

Watch more tributes to the late local radio star below.

Just heard the incredibly sad news today of @Tim_Gough passing. I know Tim was always supportive of his peers and colleagues. His loss will be felt deeply by everyone who was lucky enough to have known him. My condolences to his family, friends and the Gen X team. RIP

Sadly, DJ Tim Gough, (55) died of a heart attack this morning whilst presenting his breakfast show on GenX, Radio Suffolk. His last song on his playlist – 'Weary Day' by Madness! My thoughts are with his family.