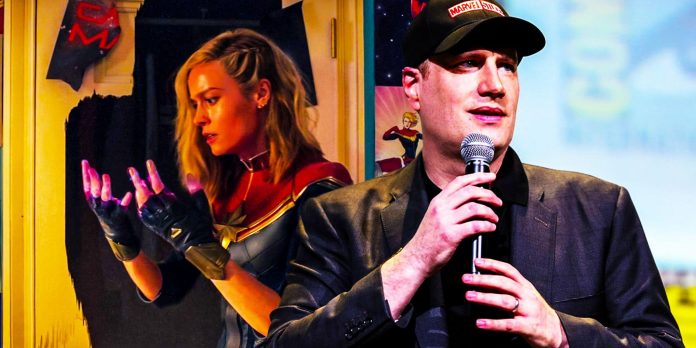 The truth behind Brie Larson’s unexpected cameo appearance in “Miss Marvel” has revealed Kevin Feige’s growing problem in the MCU. The six—part series “Miss Marvel” laid the foundation for the future, and its twists were reflected throughout the franchise – from the changes made to the abilities and origin of Kamala Khan (Iman Vellani), to the confirmation that mutants are officially present in the MCU. The Disney+ show also provided an opportunity to represent Pakistan by incorporating its culture and traditions into a superhero story. Also, “Miss Marvel” has always been intended to discuss Kamala’s coming of age and preparations for the upcoming movie “Miracles,” so a cameo by Captain Marvel (Brie Larson) was really inevitable.

In the finale of “Miss Marvel”, a post-credits scene was shown after an unexpected turn of Kamala’s genetic makeup. After her first adventures as Miss Marvel, the teenage heroine was idling in her bedroom when her magic bracelet suddenly lit up; an alarmed Kamala sat down and was taken to her toilet, from where she was teleported. In her place came Captain Marvel, who looks different in Phase 4, and her hands emit the same glow as the bracelet. Then she looked around Kamala’s bedroom, confused by the numerous posters with her image hanging on the walls. Initially, viewers thought Kamala had turned into Captain Marvel, but Marvel confirmed that the former was “sucked out by some unknown force.” However, no matter how pleasant this cameo was, the directors of “Miss Marvel” hardly knew about it.

Brie Larson’s cameo in “Miss Marvel” was directed by Marvel director Nia DaCosta under the direction of Kevin Feige. This scene came as a complete surprise to the directors Adil El Arbi and Bilal Fallah, who saw it only during post-production. This revelation reveals a problem in the MCU; since the franchise’s inception, Feigi has been watching every film in the Marvel Cinematic Universe and making sure that the interconnected details pay off in a climactic theatrical event. Consequently, there are times when only Feigi knows exactly what is going on, since he has a monopoly on secrets in the MCU. However, it seems wrong to intentionally miss such an important scene as Captain Marvel’s appearance in “Miss Marvel” from its directors—no matter how short and detached from the show it may be.

Although it was already well known that Ms. Marvel had created The Marvels, the film had not yet been fully conceptualized by the time filming of the show began. So Ms. Marvel was given more creative freedom in telling Kamala’s story, but ultimately it was to prepare and empower her with the physical and emotional maturity she needed to eventually join Captain Marvel and Monica Rambo (Teyona Parris). Because of this break in communication, the directors of “Miss Marvel” did not know about the cameo role of Captain Marvel. They often asked Feigi about the possible appearance of Captain Marvel in the series, but it was met in secret. The Marvel executive only gave DaCosta instructions to shoot a specific scene to connect the two MCU projects. However, the directors were not given much information about Miss Marvel’s plans for the future, which was strange, given that they were supposedly in charge. Feigi should have at least informed them about Larson’s participation so that the cameo role would be properly included in the show, and not just be an addition.

Brie Larson’s secret cameo, Miss Marvel, is just the beginning of a big MCU problem that is brewing. More recently, Ted Lasso star Brett Goldstein, who played Hercules in the movie “Thor: Love and Thunder,” spoke about his future in the superhero franchise, saying that he knows nothing except his brief appearance in the scene after the credits of “Thor 4.” While the Goldstein case may just be a manifestation of Marvel’s secrecy, it also indicates that the studio has focused on adding cameos and possible future teasers rather than polishing the story.

Faiga’s inability to share relevant details with the people involved also worsens the situation. Instead of providing a real plan for Ms. Marvel, an amazing cameo was added; instead of giving a more concrete look at the war between the gods, only a tease of Hercules was given. While cameos teasing upcoming MCU projects have always been the norm, in past stages they have been done appropriately. Now these teasers are simply included to make the franchise interconnected and excite the audience, compromising the quality of the projects that the studio produces. If this is not resolved in the near future, it could lead to serious problems in the MCU.