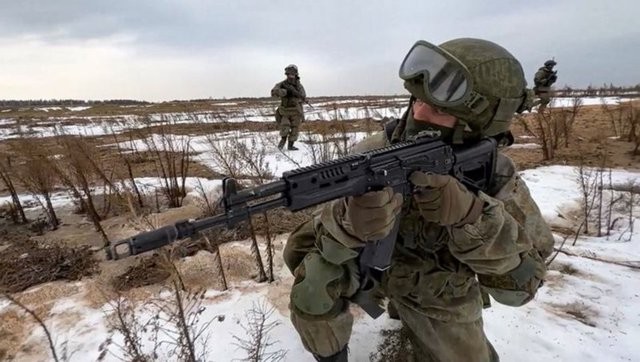 Russia’s operation in Donbass in eastern Ukraine has begun. The operation, which started in the morning with the statement of Russian President Vladimir Putin, continues. While the President of Ukraine stated that they will defend their country, news from the region about the Russia-Ukraine war comes one after another. While Russian soldiers are entering the territory of Ukraine from various points, there are hot conflicts in many regions. The Russian air force, on the other hand, is targeting strategic and military points across the country. According to information received, Russian forces entered Kiev. Here are the last minute developments about the Russia-Ukraine war…
The Ukraine-Russia crisis, where the tension has been at the highest level for days, turned into a war as of the morning of February 24. After Russian President Vladimir Putin’s address to the nation, ground and air operations were launched against Ukraine.

While Russian soldiers entered the territory of Ukraine in a short time, many military and strategic points were targeted. While the latest news of the Russia-Ukraine war is announced by the agencies, last-minute developments are coming one after another from the region. According to the latest information, Russian forces entered the capital of Ukraine, Kiev.

15.00: British Prime Minister Boris Johnson: Putin chose the path of bloodshed and destruction by launching this unprovoked attack on Ukraine. The days ahead look dark. We are with Ukraine.

14.35: NATO Secretary General Stoltenberg made a statement again at noon and said, “Russia will be responsible for the lives lost.” “Our soldiers and hundreds of jets stand by,” Stoltenberg said. “We must work together in a new determined and stronger way. Democracy will always win against autocracy.” he added.

14.20: The first statement from the Kremlin regarding Russia’s military operation in Ukraine said, “Putin will determine the time.”

14.04: Turkish Ministry of Foreign Affairs, “We find the military operation launched by the Armed Forces of the Russian Federation against Ukraine unacceptable and reject it.” made a statement.

13.49: NATO: In consultation with the Allies in accordance with Article 4 of the Washington Treaty, we have decided to take additional steps to strengthen deterrence and defense.

13.30: The adviser of President of Ukraine Zelenskiy said that there was a 2nd wave missile attack on Ukraine and the sound of explosion was heard in many cities at the same time.

13.17: A new explosion sound was heard in the capital, Kiev, from the regions targeted by Russia in its military intervention in Ukraine.

13.06: Indicating that nearly 40 soldiers lost their lives in their own armies, the Presidential Advisor of Ukraine announced that dozens of his soldiers were also injured.

12.30: Zelensky went in front of the cameras, evaluated the latest situation: The Ukrainian Army is facing heavy attacks, the enemy is trying to harm us. I urge Ukrainians to join our army

12.12: After Russian President Vladimir Putin announced that they had launched a military operation in eastern Ukraine, people began to leave the region in many places, including the capital of Ukraine, Kiev. Journalist Gulsum Khalilova shared the latest situation in Ukraine from her social media account.

11.53: German Foreign Minister Baerbock: Putin violated the most basic rule of the international order. We woke up to another world this morning. Ukraine did nothing to deserve this. Russia rejected our negotiation offers. We will implement a full package of sanctions against Russia.