Home Entertainment Brad Pitt Has an “S-T List” About Actors He Won’t Work With,... 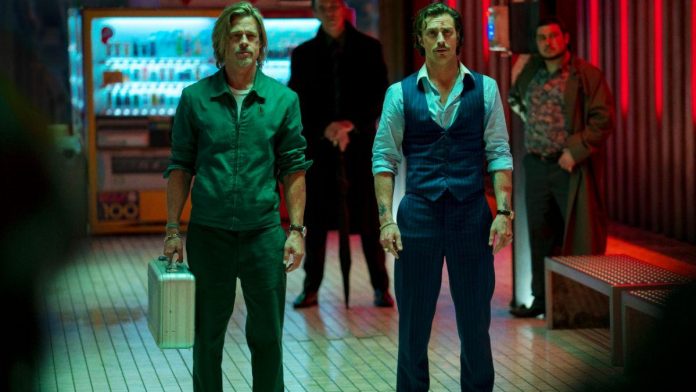 While Aaron Taylor-Johnson and Brad Pitt rode a bullet train together, the 32-year-old British actor learned something about his 58-year-old film partner. The two played opposing assassins, carrying out the same mission to find a briefcase on a bullet train heading to Kyoto. At the 75th Locarno Film Festival, where Taylor-Johnson presented “High-Speed Train” and received the award for Outstanding Achievement 2022 Davide Campari, he said that this “modest and kind man” has a list of actors with whom he would prefer not to work.

Since Brad Pitt’s career began in 1987, it makes sense that after all these years, he remembered which actors he would prefer to stay away from. According to Variety, Aaron Taylor-Johnson said that his colleague in the film “High-Speed Train” has an idea of who he would like and would not like to work with in the future. According to Taylor-Johnson:

I think he’s in a new chapter of his life. You work with many actors and after a while you start taking notes: “I will definitely never work with this person again. Brad has this list too: a list of “good” and a list of shit.

It’s true that not everyone gets along with each other. Hollywood has a whole history of film colleagues who have clashed, for example, Terrence Howard and Robert Downey Jr. The two worked together on “Iron Man,” but Howard didn’t return for the sequel because he felt his film partner had taken his “Iron Man 2.” contract money. In “Batman Forever,” Tommy Lee Jones hated working with his co-star Jim Carrey and once told Carrey in a restaurant that he hated his “buffoonery.” And we can’t forget about the legendary feud between actresses Joan Crawford and Bette Davis, which was turned into an FX series by Ryan Murphy called “Feud”. So if Brad Pitt wants to be more picky with the people he works with, he’ll have more power.

Despite the protracted drama of Brad Pitt’s divorce, he is trying to start a new life in his life. He reached new heights of Hollywood success a couple of years ago when he won the Oscar for Best Supporting Actor in the movie “Once upon a Time in Hollywood” and gave a touching thank-you speech. He also has a new film that will be broadcast on Apple TV+ about Formula 1 racing, as well as the upcoming film Babylon directed by Damien Chazelle from La La Land.

But despite the fact that Pitt is doing well in his acting career, he is also struggling with depression and a constant fear of loneliness. Nevertheless, music fills him with such joy that he fulfills his new role as the head of the recording studio, reviving the famous studio, which is located on the territory of his vineyard Chateau Miraval. As long as Pitt learns to see pain and joy in his life as a sign of growth, I’m sure he’ll be fine in the future.

Brad Pitt and Aaron Taylor-Johnson’s film “High-Speed Train” proves that these two have excellent dynamics of working together, and we hope that they are on the list of “good” each other. Last weekend, the action-packed film grossed more than $30 million at the box office, but it still has a lot to do to surpass the film’s stated budget of $90 million. All the critical reviews about Bullet Train agree that this movie really is a wild ride with a bunch of exciting battle scenes that are worth watching. You can already watch the 2022 movie in cinemas.