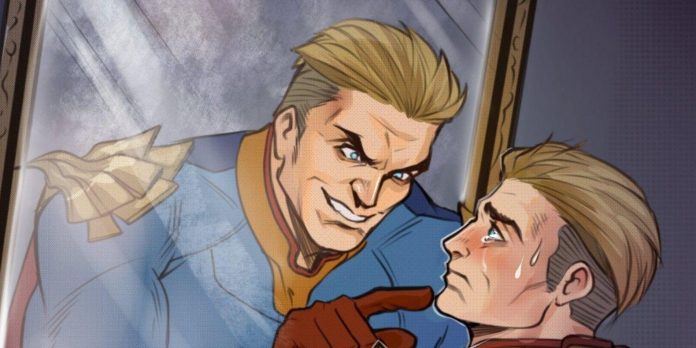 Attention! There are spoilers ahead for the 3rd season of the 6th series of “Boys”.

A new piece of The Boys fan art reinterprets the Homelander reflection scene in the style of comics. Based on the Garth Ennis and Darik Robertson comic book series, The Boys from Prime Video takes place in a world where superheroes (also known as Supes) have been corrupted by their celebrity status. Superheroes behave recklessly, aided by powerful corporations such as Vought International, known for its satirical views on Marvel’s “Avengers” in “Reckoning” and the D.C. Justice League in “Seven.” At the center of the series is Homelander (Anthony Starr), a perverted and narcissistic version of Superman from DC.

Having survived the life of a laboratory rat since early childhood, one part of the Homelander’s personality is an insecure child who craves a mother/father figure and the admiration of everyone around him. The other part considers itself above all. In other words, he is “the only person in the sky.” If you can’t love him, to be afraid is “A-1, OK-Doc” with Homelander. In the recently released episode of the 3rd season of “Boys”, “Gerogasm”, this duality is explored in the way that viewers have already seen in the series. In a scene reminiscent of Norman Osborn’s dialogue with the Green Goblin in Spider-Man or scenes with Gollum/Smeagol in “The Lord of the Rings”, the Homelander stands in front of a large mirror in his chambers, and his two halves interact with each other, with “bad saying “good”, the latter needs to be cut out like cancer. Now one fan interpreted this scene as if it were on a panel on a page.

Related: The secret of a loved one completely changes the past and future of boys

Artist Khanumtaza recently tweeted an illustration inspired by Boys. Art perfectly reproduces the reflection scene in the third season of the TV series “Homeland”. The work shows how the Homelander’s dangerous ego bulges out, while his other side cries, and perhaps hopes that the man in the mirror will not take over completely.

The above scene is just one example of the fact that the adaptation of “Gerogasm” in the third season of “Boys” is something more than just a wild superhero event. The Homelander’s mental state is becoming increasingly fragile, with the return of the Boy Soldier and the potential collapse of Vaught pushing him to the limit. Like Superman to his Captain America, Soldier Boy was a Homelander before Wout decided they needed an upgrade. And although in the 1st and 2nd seasons of “Boys” the Homelander was never physically threatened, in the 3rd season the 70th annual Gerogasm is used as the place of the first real test of the Homelander in the fight against Soldier Boy, Butcher and Huey. This not only humiliates the Homelander, but also almost drives him crazy with the new strength of the Boy Soldier.

The Boys’ “Gerogasm” surprised many with its more dramatic elements. In his final scenes, the Homelander looks in the mirror again, this time with a bruise on his face—a reflection of the humanity that super thought he was superior to. There is no conversation yet. with his mirrored alter ego, as in the previous scene, the Homelander’s thoughts are clear on his face. Suffice it to say that Starr’s performance in season 3 of “Boys” confirms that the Homelander is one of the most complex and interesting villains on television. In particular, “Boys”. The reflection scene offers a new understanding of his forward movement, and this art perfectly brings him back to the original comic material.