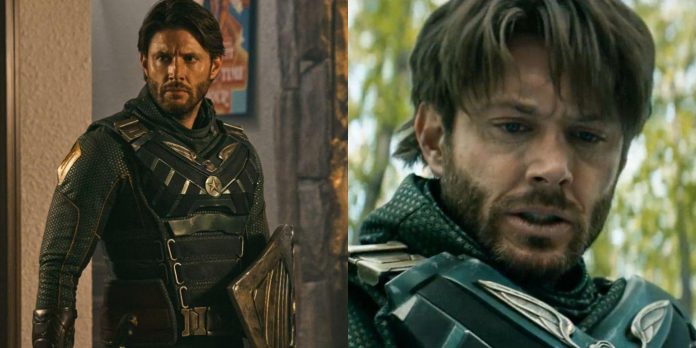 Content Warning: This article contains references to profanities and mentions of violence

Season 3 of The Boys has proven to be one of the best shows of the year, and a lot of that is down to its stars and characters, not least of all the incredible Jensen Ackles in the role of Soldier Boy. Fans hope he returns in season 4 after his story finished somewhat open-ended in season 3, not just so he can provide more kickass action and social commentary, but some more of the show’s best quotes.

From hilarious one-liners to PSAs released on social media to quite deep character quotes, Soldier Boy has some fantastic quotes – some of the best of the series, in fact.

“What’s Black And White And Red All Over?”

Soldier Boy has some of the most hilarious lines of season 3, and this is a prime but twisted example of this, coming after he shoots a priest and a nun during his hunt for Mindstorm.

It is not just funny thanks to the shock factor, but the fact that the answer to the riddle is a newspaper, something slightly outdated and close to what he is. It perfectly encapsulates everything he represents and also gives everyone another hint as to who he is.

“I Held Onto The Hope That You Would Come.”

Soldier Boy is a truly awful person throughout the season, but that does not stop audiences from getting emotional depth from the character, which comes partly in his hunt against Payback (especially his former love, Crimson Countess).

His whole scene with her as he finds out what happened and why he was given to the Russians by the former team is tense and even slightly emotional, and Jensen Ackles’ performance is superb. Even if it is near impossible to relate to Soldier Boy, him getting burned by the woman he loved, who told him she did not love him, is a relatable feeling to many.

The finale had some fantastic action and brilliant character moments. It also saw the whole plan getting plagued with the massive wrench that is Ryan, who prevents Billy from allowing Soldier Boy to kill/depower Homelander, much to the shock of the former.

His disgust and anger in this whole exchange are great, and his “F*** you” snap could easily beat out this as the best quote of the scene based on delivery alone. On top of that, this ordeal arguably helped Butcher’s character, showing that he does actually have limits.

“I Fought For This Country, And What Did I Get For It? Forgotten.”

Soldier Boy has to undergo a serious shock to the system upon his return to society, making various toxic comments on the state of masculinity and the world in general, but also having to cope with the fact he has been discarded, forgotten to time.

RELATED: 10 Most Gruesome Deaths In The Boys Season 3

On a rant about the state of the world and what he did for the country, he caps it off with this pretty emotional line, which clearly shows – alongside other moments – that underneath all of that awfulness, there is some human emotion there. It may not make him sympathetic, but understandable.

“If Taking Drugs Is Uncool, Then I’m The Most Uncool Motherf***r On The Planet.”

As far as TV and movies go, The Boys’ social media accounts are unmatched, and out with the actual show, they release a bunch of great content – including Soldier Boy’s anti-drug PSA and the subsequent outtakes, which is where this hilarious line comes from.

The initial PSA video was Soldier Boy speaking against drugs in the outtakes, though this quote arose, and it is hilarious. What makes it all the better is Jensen Ackles’ terrific chuckle as soon as he pronounces himself a profuse user.

The video of Soldier Boy covering Blondie’s eccentric track ‘Rapture’ has a strong hold on social media, and for good reason; it is great and quite catchy too. For his performance and for the video, it is hard not to consider the lyrics as some of his best quotes.

RELATED: 10 Best Duos In The Boys

While the entire song may not be known to many, just about everyone on TikTok or who is a fan of The Boys knows “Flash is fast, and flash is cool…” thanks to Soldier Boy and Jensen Ackles’ amazing voice. This is another example of the show and its social media teams being next-level great.

“I Mean, What Father Wouldn’t Want That For His Son?”

One of the most jaw-dropping moments from this season (which is full of wild stuff) was when Soldier Boy announced to Homelander that he is his father, with this line being the one that confirmed as such.

Right from the first episode, the series has been full of twists and turns, and this is one of the best, with Ackles’ delivery of such a huge moment being fitting. There are a lot of wild implications from this. Soldier Boy telling Homelander this led to the death of Black Noir, to Ryan’s involvement with Homelander, and may mean big things for season 4.

“Buddy, You Think You Look Strong? You’re Wearing A Cape.”

Season 3 was consistently fantastic, but perhaps the best episode of the bunch was the one most hotly anticipated before the season started, ‘Herogasm’ – one of the wildest and best hours of TV of this year and of the past few years (particularly since it saw many of the show’s best characters clash).

Much of this brilliance was down to Soldier Boy’s involvement, particularly with his and Billy Butcher’s battle with Homelander, arguably the show’s best fight scene. This quote is not only hilarious and reminiscent of Edna Mode but illustrates Soldier Boy’s lack of fear of Homelander and is just a brilliant line for an epic showcase. This is one of many great Soldier Boy lines from the episode.

The make-or-break moment for Butcher, Maeve, and the Boys’ quest to kill Homelander came when Soldier Boy approached his son with nobody, not even the audience, knowing what would happen.

Soldier Boy’s dismissal of Homelander with this line is glorious. There is a sense of release that comes with this line, given how pulsating and tense the scene is before it, but it is also a line that can be taken a couple of ways. Either Soldier Boy was ashamed of what his son had become, or he did not consider Homelander his real son, or, even worse, he was bitter about being replaced. No matter what, this line and this moment are epic.