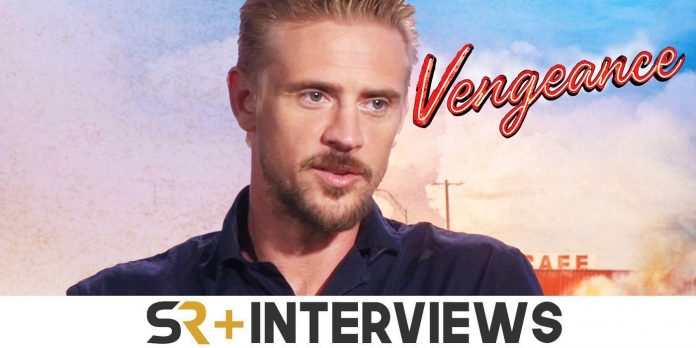 “Revenge,” coming out in theaters on July 29, was written and directed by The Office fan favorite B.J. Novak. Novak also stars in the film as New York journalist Ben Manalaowitz, who gets a call in the middle of the night and is dragged to West Texas for a funeral. His mission is to uncover the identity of those responsible for the death of Abilene Shaw, the girl whose boyfriend he pretends to be.

The caller is Abilene’s brother. Ty (Boyd Holbrook, the Sandman), who is looking for revenge but agrees to a podcast about his sister’s potential murder. Ty immediately takes Ben under his wing, completely unaware of how little Ben actually knew Abilene and how little he thinks about Ty and the entire Shaw family. What follows is partly satire, partly a murder mystery, and partly an existential reflection on the state of human connection.

Screen Rant talked to Holbrook about what Ty sees in Ben, how he copes with the stereotypes that Vengeance explores, and what B.J. Novak was like as a partner and director.

Screen Rant: I really like Vengeance. I saw him before Comic-Con and I still think about him after Comic-Con, despite everything that hit me. I think it’s very rare that a movie makes you think that way.

I like not only your character, but obviously your whole family. They’re so touching, and Ben really likes them right away. As for Ty, what do you think attracts him to Ben so quickly?

Boyd Holbrook: Well, I think Ben is an outsider. Everything connected with history is so ingrained; so close to it. When he sees someone coming from New York who he thinks has the true intelligence [to] become a savior, [he] hopes to [find out] what happened to my sister.

Vengeance plays with many southern stereotypes and overturns them. This is West Texas, but being from Kentucky, how much fun was it for you to interact with these stereotypes and Ben’s views on people?

Boyd Holbrook: Well, it’s nice to know that there are misconceptions, and everyone knows that they are not entirely accurate. It’s a pleasure to play with them, because you know what will happen as a result, and this clash of cultures will unite in this brilliant new fresh comedy that B.J. wrote.

B.J. obviously plays along with you, but he’s also a director, a screenwriter; he wears all these different hats. How does it feel to see him switch from one to the other? What kind of experience is this?

Boyd Holbrook: You know, I was constantly amazed by the ability to put all these things on his shoulders and just lead us as a team to the gates of this movie. He wrote it from scratch and then produced it. And he also played and directed it. It was almost an experiment to see what kind of pressure one person could withstand and succeed. It was almost like a story within a story.

You have not only that, but also the Sandman that I am so excited about. What influences how you choose a story? Because you have such an eclectic variety of projects.

Boyd Holbrook: I just like to have a range going from project to project. And that’s the excitement of being an actor; it’s putting yourself in these environments and figuring out these different worlds. From Vengeance, a very realistic world, to the very sublime, fantastic world that Neil Gaiman wrote for The Sandman. The two polar [opposites] may be different in my understanding.

And so for me it just requires a lot of rehearsals. [Requires] a village to grow a character. I work with voice coaches like Gary Grinnell and my acting coach Terry Knickerbocker. We all spend a lot of time on this, so we’re actually working with a talented person like BJ who wears all these different hats to try to make his job a little easier.

A journalist and podcaster travels from New York to Texas to investigate the death of a woman he slept with.

Also check out our interview with Vengeance star and director B.J. Novak.

The Vikings Had a Second Secret Appearance by Travis Fimmel That...