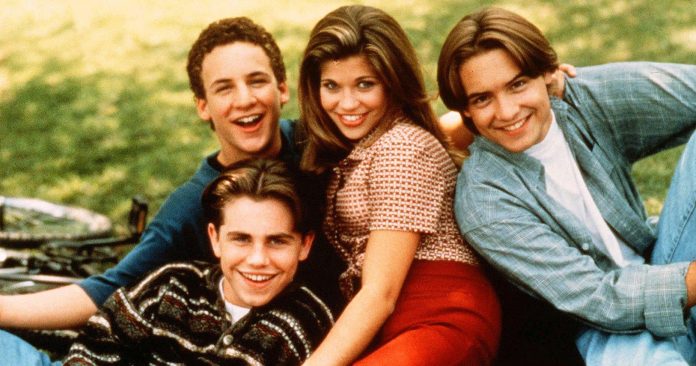 Saying goodbye to Mr. Feeney was hard, but saying goodbye to each other was even harder. A boy meets Ryder Strong from the World, Daniel Fishel and Will Friedl can talk about the filming of the final episode of their favorite series, as if it were yesterday.

The actors of “The Boy learns the world”: where are they now?

“It took exactly as long to watch this scene as it took us to do it,” Friedl, 45, tells Us Weekly exclusively.

“It was exhausting,” adds 42-year-old Strong. “It was very emotional.”

“It was the last scene of the last show in front of the audience at the evening of cassettes. We were saying goodbye to each other in real life. I was moving to New York to go to college, like Sean’s character. So I knew I was going to say goodbye to them, not just to this job, but to this coast. It was super emotional. At this point there is no separation between Sean and Ryder,” Strong explains to Us.

“It’s the same with Topanga,” Fishel interjects. — Those tears that you see me crying are real. And we didn’t rehearse it. We read it at the table, which is the very beginning of our week. We read it so the network and the producers could hear it. And then we all agreed that it would be too difficult to go through with it. And we also didn’t want to ruin it with a bunch of rehearsals. So we just didn’t touch it all week until we got to the recording night.”

The short scene took only one take. As Mr. Feeney says, “Believe in yourself. Dream. Try. Do good,” Topanga memorably poses a question about his formulations.

It was difficult for Friedla to understand that the next day would be the beginning of a new chapter.

“It’s very strange to be with the same people every day for seven years, and then one Thursday night, you wake up on Friday morning and it’s over,” he says. “That’s it. It just ended.”

“We constantly use the word unpack in our podcast. I’m sure that’s what we’ll reveal when we get to it in seven years,” Friedl jokes about the show’s last episode.

“It was just interesting when we started the podcast to realize that actually a lot of our memories are associated with a co—ed school, a real school that fans have no idea what it’s like,” adds Strong. “But we spent three or four hours a day in a room with two teachers and all the children. Everyone is working on their own topic. And this is really the place where we communicated. That’s where we really hung out.”

Series of the 90s

Similar behind-the-scenes memories will be presented to listeners weekly. “That’s where we exchanged personal stories. Because you work on the set,” Fishel notes. “And if you talk too much in between rehearsals, you will have problems. So there really wasn’t time for that. But a leisurely walk back to school, where they really want us to run back to school, we would take our time, stop at a craft service.”

The trio may bring different memories to the microphone, but they can all agree on what the show means to them.

“It was all my teenage years. I was on the show from the age of 12 to 19. I look at it like I’m opening a time capsule,” says Fishel. “And I sort of dig into a time capsule and let any emotions come to me for the first time. Because I think I’ve never touched it. There were small fragments here and there where something pops up or a memory flashes, but then you go back to your normal life. And this podcast really gives us the opportunity to take our mind off everything else and really focus on that.”

“I want to accept that answer,” Friedl teases.

“There is no other answer,” admits Strong. “The only thing I would like to add is that it was so much fun just being together. We hang out, but, you know, once every couple of months. Now we meet once a week.

How the Amazing Mrs. Meisel coped with the “Wheel of Wonders”...