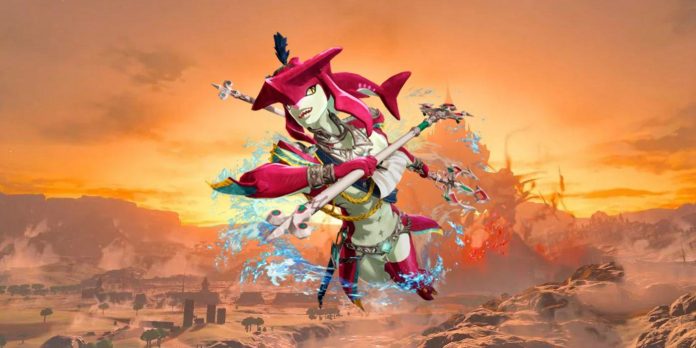 One character in Legend of Zelda: Breath of the Wild should come back with a bigger role in the sequel, tentatively named Breath of the Wild 2: Sidon, prince of the Zora and brother to the late champion Mipha. He had a supporting role in the first game helping Link defeat Divine Beast Vah Ruta, but didn’t play as big of a part as he could have. BOTW 2’s release date is currently set for Spring 2023, so hopefully, players won’t have too long to wait to see Sidon and other BOTW characters again.

Sidon is one of the Zora in BOTW. Players first meet him around the waters of the Lanayru region, where he has several Zora out looking for Hylians. After the initial meeting, he will guide them to Zora’s Domain, a recurring location in Zelda games. There, it’s revealed that he was actually searching for Link, but did not recognize him until his father, King Dorephan, reveals his identity. Later, he helps convince Muzu to aid them in calming Vah Ruta. In the battle with Vah Ruta, Sidon carries Link and helps him avoid the ice projectiles it creates, and to climb its waterfalls in order to hit it with shock arrows and gain access to the inside.

Related: Every Ocarina of Time NPC Really From Mario, Not Zelda

It makes sense for Prince Sidon to return in BOTW 2 since he’s one of the four “new champions” in the original game, along with Riju, Teba, and Yunobo. There’s seemingly no reason for him not to be brought back in some capacity, regardless of how he’s utilized. Many Zelda characters could return in BOTW 2, but Sidon could be more likely than minor ones such as Glendo. Since so much of the game is still shrouded in mystery, it’s almost impossible to predict which characters will return and what roles they will play, but hopefully, Sidon will have a bigger part in BOTW 2’s story than he did in the original game.

Why Sidon Should Return In BOTW 2

Sidon is a fan-favorite character, for reasons that include his friendly nature and positive attitude in BOTW and Age of Calamity. He frequently compliments Link and encourages him in their interactions on the way to Zora’s Domain before retaking Vah Ruta and after the job is done. On a quest to stop an ancient evil and save both Princess Zelda and the kingdom of Hyrule, he’s a much-needed ray of sunshine, and a BOTW NPC that’s hard for players to hate. In addition, he holds no animosity toward Link for Mipha’s fate, unlike many older Zora, and seemingly had no hang-ups about her feelings for him prior to the Great Calamity. Sidon is kind-hearted to a fault, and that kindness and his popularity should translate to a recurring role in BOTW 2.

Sidon also has a lot of untapped potential as a character that could be realized in BOTW 2. Losing his sister from a young age is a devastating event, one that can lead to a great character arc if his past is explored. Seeing Sidon grieving and perhaps even bitter before he became the upbeat person he is during the events of BOTW can be a good way to expand his character. One of Zelda: BOTW’s easily-missable side quests – “Zora Stone Monuments” – will also reveal that he has great accomplishments as a warrior. Players can find a stone tablet detailing Sidon’s victory over a monstrous Octorok big enough to swallow him whole. Events like this could be another good opportunity to learn more about his past.

If Sidon does have a bigger part in BOTW 2, there are a few ways that the game could use him. A good one could be having him become the new pilot of Vah Ruta – if the Divine Beasts also make a return – in Mipha’s stead, and the new Zora Champion. Gathering the four allies that aided Link in quelling each of the Divine Beasts, having them become their new pilots, and assembling them to combat whatever evil faces Hyrule in the new story sounds like a very compelling questline, and could be a great way for BOTW 2 to use the Divine Beasts and give Sidon a more important role in the process. This also opens up the opportunity for him and the other new champions to act as a team in a capacity similar to how Mipha and the others did in Age of Calamity, and appear in multiple stories and side missions instead of only helping with Vah Ruta.

It’s also possible that Sidon won’t be an ally to Link at first in BOTW 2. The mysterious mummy that appears in one of its trailers could begin its attack on Hyrule with Link’s friends, and corrupt them with the Malice it’s shown to possess in order to turn them against him. Having him act as a deuteragonist has a great deal of potential, especially if it causes buried resentment towards Link for Mipha’s death to come to the surface. It’s rumored that BOTW 2 will have a darker tone, and Sidon and Link’s other allies being taken over by Ganon’s power – if he is indeed the mummy in the trailer – sounds like a very dark storyline indeed, and can also act as a precursor to assembling them all into a new team of champions.

Will Sidon Be Playable In BOTW 2?

There’s also the possibility that Sidon will be playable in BOTW 2. He was in Age of Calamity, so there’s a distinct chance that players will be able to control him again in BOTW’s sequel. If he is, then the rest of the new champions and perhaps some other characters could be as well. Underwater exploration was missing in BOTW, so a playable Sidon could be a great way to introduce it. The difference between Age of Calamity and Breath of the Wild’s combat mechanics – as well as Breath of the Wild 2’s presumed open-world exploration focus as opposed to hack n’ slash action – means that Sidon and other characters might not be exactly how they are in Age of Calamity, but the prospect is still an exciting one.

If Sidon is playable in BOTW 2, however, then he may not be for the entire game. Everything revealed so far points to Link being the main focus, and although the idea of switching back and forth between him and a variety of other characters sounds nice, it may not be conducive to BOTW’s style of gameplay. Players could control Sidon for certain missions in a temporary capacity instead of having access to him whenever they want. It’s also possible that he’ll serve a mobility purpose and that players will only be able to play as him in water or when crossing it. Whether or not characters like Sidon or Zelda will be playable in BOTW 2 may not be revealed until Legend of Zelda: Breath of the Wild‘s sequel actually releases, so players will have to wait and see for any news.