Home World Boston Dynamics robot at war! It was a movie that came true 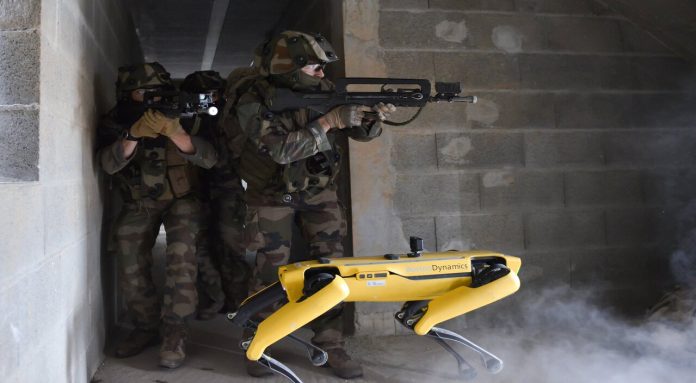 Boston Dynamics: Sci-fi movies come true. The French army used robots developed by Boston Dynamics during their combat training. Spot, one of the robots, supported the operations in exploration mode for two days.

The training aimed to measure the value of robots on the battlefield and to prepare soldiers for the next generation of war technologies. Although Spot slowed down the soldiers, he managed to make the battlefield safer.

Robot war training took place in a military school in the northwest of France recently. The soldiers, who specially prepared three attack and three defense missions, performed these missions first alone and then using robots. While the soldiers moved faster in the mission without using robots, they had less casualties in the scenario where Spot was used.

War School stated that the mission was quite successful, but the biggest problem was the battery. Soldiers had to change the robot’s battery in the middle of the exercise. The French army also posted on its Twitter account, “We are preparing our soldiers for the challenges of the future”.

Making a statement on the subject, Boston Dynamics officials announced that the robots are not provided by them. The US company stated that they do not want their products to be used to harm any person or animal. Still, the authorities said he was not against using robots to take soldiers out of danger, adding that they are still considering the idea of ​​using robots for reconnaissance and other more passive missions.

The French army made an agreement with Shark Robotics, the company’s European distributor, to test the warrior robot.

USA wants to use robots

While Boston Dynamics was still in its infancy, it was funded by the US military’s DARPA unit (The Defense Advanced Research Projects Agency). However, the company slowly severed its military ties. Another manufacturer came to the rescue of the army that wanted to use robots in especially dangerous missions. The Spot-like robot developed by Ghost Robotics recently entered the air force’s radar. The robot, which is currently used only for security purposes in military bases, is expected to take part in various missions in a short time.

What do you think about the use of Boston Dynamics robots in the military field? You can write your opinion in the comments.