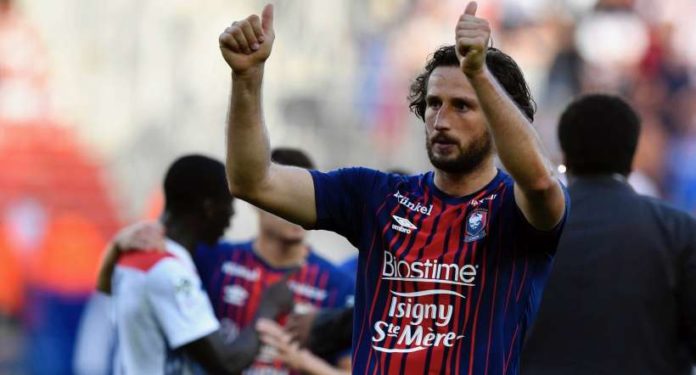 Returning to Bordeaux in January 2018 with the goal of finishing his career with the Girondins, the defender had to go into exile in Caen. In Normandy, the love affair with the MSC did not end well. Since then, he has not crossed the lawns of Ligue 1.

The least that can be said is that the career of Paul Baysse (31 years) was rich in emotions. Revealed in the eyes of the general public when he wore the shirt of Brest (2010-2013), the defender had then arrived injured knee in Saint-Etienne. A new club where he was supposed to cross a course. But the Etienne experience only started on 18 September 2014, when Baysse played his first official match with the Greens against Qarabag in the Europa League. In the meantime, the player had injured the other knee, just after healing the first.

It is finally in Nice that the native of Talence will revive. Lifted to the Gym during the 2015/2016 season, Baysse will remain two years on the Côte d’Azur where he will eventually wear the captain’s armband. The story could have been beautiful, but it ended with a defender free of any contract. A choice that was however beneficial for Baysse since Malaga came to offer him his first challenge in Liga, with a comfortable salary at the key (at least 150,000 € / month). In Andalusia, rebelote. The Malagueños live a bad season (they will be relegated to the 2nd division at the end of the season) and Baysse will stay there for only six months.

Missing L1 radars since February 2019
Released by the Boquerones, the former Stephanois then chose to return to the fold in Bordeaux. Engaged in January 2018, Baysse does not live an idyllic reunion with the Navy and White. Expelled against Caen (0-2) in his second game with the Girondins, Baysse will gradually come out of the plans of Gustavo Poyet who will prefer the duo Pablo-Koundé. Faced with this situation, Baysse agrees to be loaned to Caen during the 2018/2019 season, just to get back to playing time. In Normandy, he has 20 Ligue 1 matches on the clock.

Not that bad, except that his complicated relations with the Malherbist staff will be right of his course Caen. He thus played his last match with the SMC on February 27, 2019. A significant date since it is also the last time that we have seen Baysse on Ligue 1 ground. Silence radio since. This summer, he was part of the unwanted loft set up by the Girondins, training apart, without seeking conflict with his leadership. Reintegrated since in the group, “he plays the game and trains normally,” says a regular Haillan. Not enough to say that he fully accepts his situation. The player, he, carefully avoids the media.

Returning to his Bordeaux origins at the base to finish his career, Baysse is it really in the perspective of folding new luggage if nothing changes? This summer, Nice has thought of bringing it back (on loan) to the Allianz Riviera. The only real track for a player not specially courted. For their part, the leaders of Bordeaux also do not seem to be alarmed despite the inactivity of an item paid about € 100,000 per month, and whose contract ends in June 2021. “Baysse has a big character, he know why he came back. He agreed to lower his salary to come back, so he will not sit on his contract. He also did not have a career that allowed him to make millions, so it would be surprising to see him give gifts “, we are told, however clarifying that the case Baysse is not part files tended to manage by Bordeaux like those of Cafu, Kamano and Sankharé.

Why Jude Bellingham is perfect for Manchester United

Details of Cole Beazley appear: The reaction of the NFL world...