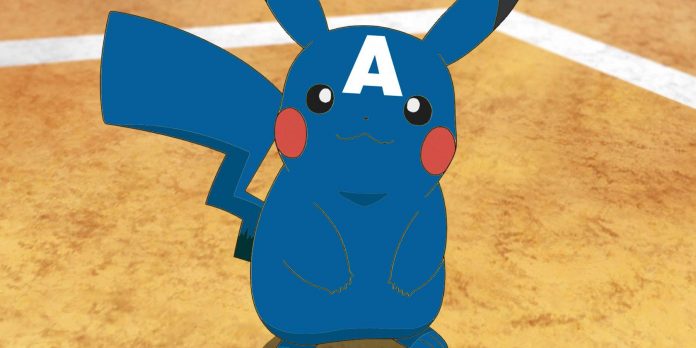 If the franchise is popular enough, it will definitely have mountains of fakes. These contraband toys and collectibles often cause ridicule on the internet due to their poor quality, manufacturing errors and unusual features.

A Reddit user from Italy recently shared a couple of images showing very suspicious Pokemon toys. And while one photo shows a relatively typical example of unlicensed merchandise, the other shows a bizarre crossover between Pokemon and The Avengers.

The strange bootleg in question features an unbranded version of Ash Ketchum and four huge Pikachu in Avengers costumes. This includes versions of the electric mouse dressed as Captain America, Iron Man, Spider-Man and the Hulk. And while these Pikachu cosplays are actually pretty cute, it’s unlikely that Marvel and the Pokemon company signed up for this particular Pokemon merchandise. Click here to see the full Reddit thread.

License? what is it from pokemon

There are other problems with these counterfeit goods with Pokemon, and the longer you look at the picture, the more it catches your eye. For example, Ash’s toy has a smaller scale than Pikachu, which makes it seem that he was thrown belatedly. He’s also a very scruffy figure, with bad paint and a strangely blank expression on his face. Pikachu’s ears also have a strange shape, and one commenter compared the Pikachu Hulk’s ears to tequila worms.

The packaging is also peculiar. It features two different versions of Ash, neither of which looks like a toy, and a seemingly random collection of Pokemon. The various graphics don’t even have a single design, including a combination of plastic figurines and at least three different styles of 2D art. The Avengers crossover is the strangest part of these unlicensed Pokemon toys, but the poor quality of the toy and the prefabricated packaging add to the overall clumsiness of the product.

Compared to the unlicensed Avenger crossover, the second image looks like a much more orthodox Pokemon bootleg. It has fourteen plastic Pokemon, including a Large Pikachu that seems to stick out its tongue like a dog. Other oddities include a pink Psydak, a Green Meow, and a second oddly shaped Pikachu. About half of the small plastic Pokemon are not even packed properly and seem to be loose in plastic packaging. The decoration of the box also deserves attention. It features a seemingly random mix of characters and Pokemon, including the same two versions of Ash and at least seven Pikachu.

Of course, finding fault with the peculiarities of these unlicensed toys may seem boring because of the trees. However, given that Pokemon bootlegs seem to be everywhere, it’s worth knowing what to look for when searching for discounted products.

Welcome to Platteville: The Evolution of Moriah’s Style in photos