Home Music News Bono at a concert in London: U2 frontman enlivens his memoirs with... 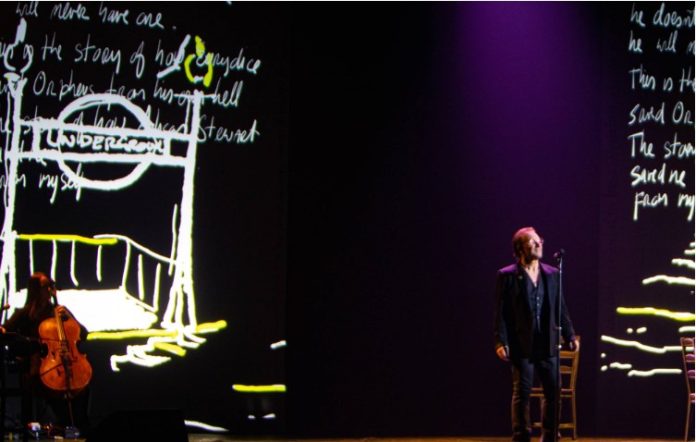 November 16, London Palladium: The singer, promoting his new book ‘Surrender: 40 Songs, One Story’, shares his life story – with a little help from U2’s back catalogue.

“Welcome to my half-man show,” Bono jokes as he makes his grand entrance onto the London Palladium stage. “This feels somewhat transgressive without my bandmates. But I have permission for one night night only in Soho.”

For those who have ever been to a U2 concert, tonight is far from the theatrical pomp of their stadium rock shows. Instead, accompanied by cellist, harpist and percussionist/music director Jacknife Lee, Bono’s performance of “Stories Of Surrender” is a stripped-down, immersive journey into the recent memoirs of the Surrender frontman: 40 Songs, One Story, interspersed with excerpts from U2. classics.

While today’s event does touch on his missing bandmates — this week 46 years ago he joined The Edge for the first time, Adam Clayton and Larry Mullen Jr. – the narrative here is more focused on Bono’s life, his losses and his own life. the experience of death. As in his book, at the beginning of the show, the U2 frontman recalls the latter when his “eccentric heart” almost burst in 2016 due to a blister on the aorta. But what’s impressive about this one-man show is how Bono actually brings the words on the page to life through his own funny impressions of people like Luciano Pavarotti, his U2 bandmates, and his late, confused father Bob Hewson, whom he’s always trying to impress.

Bono also convincingly paints every scene on stage, using only a few chairs and tables as props. His stories about how he sat with his father and brothers in the Sorrento Lounge of his local pub Finnegans are especially funny: at one point he discusses the possibility of writing a song with Pavarotti, only for his dad to severely criticize his son in need of approval. .

Pavarotti resurfaces in a hilarious story about the recording of the 1995 U2 single “Miss Sarajevo”, resulting in two band members hiding from the late tenor like a couple of naughty schoolchildren (Pavarotti appeared on Bono’s doorstep with a full film crew in tow to convince the band to play a charity concert with him in Italy). By the way, the two bandmates mentioned — Clayton and Mullen Jr. – never showed up at the concert, and instead Bono took his father and Edge with him to Italy. Having accidentally met Diana there, the Princess of Wales sees how the tough behavior of his stubborn old man finally melts, helping to eventually establish a closer bond between father and son.

Music, of course, is constantly present throughout Bono’s journey: he rattles off “Out Of Control” after remembering how the Ramones inspired him to write his first song in his bedroom. Then there is an exciting slow string version of “With Or Without You”, accompanying the story of how he fell in love with his wife Ali Stewart, and then the piercing “Sunday Bloody Sunday” is performed, illustrating the band’s recordings for their 1983 album. War’.

While Bob Geldof listens in the Palladium auditorium with the likes of Noel Gallagher and Brian Eno, Bono continues to sing a bombastic excerpt from “Pride (in the Name of Love),” recalling U2’s 1985 performance at Live Aid. Ironically, the band never managed to play this hit at the time because the singer famously flooded their set after pulling a fan out of the crowd during “Bad”. It was a moment that made U2 believe at first that they had “shot themselves in the head”, but in fact it had the exact opposite effect.

Elsewhere, Bono’s eye-opening first visit to Africa during the famine in the mid-80s brings an exciting excerpt from “Where The Streets Have No Name”, and the birth of his first son during “Desire” brought the band their first victory in the UK. Number One sees the frontman rolling out his stripped-down pop version of the track.

Back at the Sorrento Lounge, Bono then depicts the heartbreaking scene when his father tells him he has cancer, before the narrative switches to the U2 frontman reliving the last moments of his father’s life. It includes a powerful piano excerpt from “Beautiful Day,” in which Bono impressively exchanges vocals with harpist and keyboard player Gemma Doherty, before he ends with an emotional interpretation of the 1894 operatic Italian song “Torna a Surriento” as the finale. a tribute to his late father. It’s an exciting conclusion to The Story of Surrender, concluding the book with this fascinating look at Bono’s memoirs and thoughts.

Dua Lipa on the breakthrough in cinema: “For me, these are...