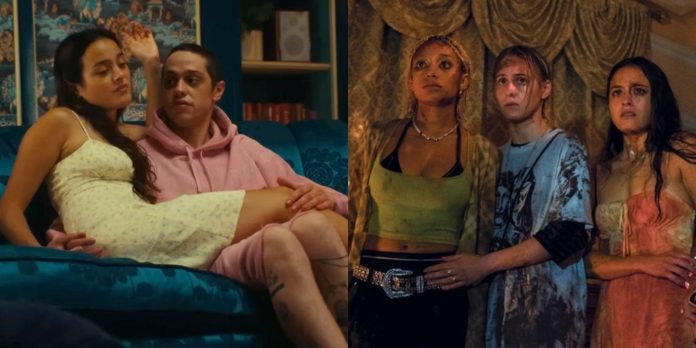 Horror fans are anticipating the A24 film Bodies Bodies Bodies, which stars Pete Davison as a wealthy young adult named David who parties with his pals at a house in the country and the night turns dangerous. While Davidson is known for being a member of the Saturday Night Live cast and starring in his own comedies, the comedian and actor doesn’t have Instagram. In February 2022, Davidson rejoined the platform and followed Kim Kardashian and Sebastian Stan and then deleted his account, according to E! News.

While fans can’t follow Davidson, they can check out the rest of the cast of Bodies Bodies Bodies, which is a dark comedy that offers up a fresh take on the classic story of friends hanging out together and discovering something scary.

Amandla Stenberg stars in Bodies Bodies Bodies as Sophie, who has been in rehab, and now she’s spending time with her group of friends again. It’s clear that this will create some tension, and it’s interesting to see the dynamic between the characters. From the trailer, fans can see that the friends decide to play a game called “Bodies Bodies Bodies” and also say that they will always be close friends who look out for each other.

Stenberg starred as Ruby Daly in The Darkest Minds, a science-fiction movie based on the young adult novel by Alexandra Bracken. The actor also played Starr Carter in The Hate U Give, one of the best movies with a Georgia setting and an emotionally affecting story about a teenager who loses their best friend when a police officer shoots and kills them. With 2.3 million followers on Instagram, Stenberg has the largest following of the cast of Bodies Bodies Bodies.

The best young adult slasher movies feature friendships along with romantic relationships that add an emotional element to the scary moments. Maria Bakalova plays Bee in Bodies Bodies Bodies, whose girlfriend is Sophie, which is how Bee meets the other characters. Bee comes from a poorer background than the others.

Bakalova played Anika in the Netflix comedy The Bubble, which was written and directed by Judd Apatow and follows the cast and crew who are filming a movie in the middle of the COVID-19 pandemic. The actor also starred in Borat Subsequent Moviefilm as Borat’s 15-year-old child Tutar Sagdiyev, who he travels to the United States with.

Chase Sui Wonders plays Emma in Bodies Bodies Bodies, who is in a relationship with David. Some of the most entertaining horror comedies are slashers, and this A24 film definitely delivers laughs and also terrifying scenes. From the trailer, it’s clear that the characters have some tension and problems with one another, no matter how close they claim to be or how much they want to trust each other.

Fans might recognize the actor from playing Riley on the HBO Max series Generation, which aired for a single season. Wonders also played Chase in the film On The Rocks.

There are many horror movies about a group of friends and Bodies Bodies Bodies is likely to be a fan favorite thanks to the seven main characters who have been close for a long time. Like so many other groups in the genre, they’re just trying to have a good time when everything spirals out of control. Questions of how much they can actually trust each other come up as everyone is a suspect, which is a trope but feels perfectly used here as it works for the story.

Myha’la Herrold plays Jordan, who is a member of the main friend group. The actor’s previous credits include the TV show Industry, which is about people working in the trading and banking industries after the 2008 crash. Herrold also played Logan in Plan B and Tami in the emotional episode of Modern Love called “So He Looked Like Dad. It Was Just Dinner, Right?”

Rachel Sennott plays Alice in the horror comedy, who dates another member of the friend group called Greg. Sennott played the character Jackie on the sitcom Call Your Mother which only lasted for one season. Jean Raines has retired and misses her kids, who are grown up and living their own lives. Sennott played Jackie’s daughter Jackie, who is 25 and having a tough time with her mom caring so much about what she’s doing.

Sennott also starred on the web series Ayo and Rachel Are Single with actor and comedian Ayo Edebiri, who stars on The Bear, one of the best food TV shows.

There are a few different couples in Bodies Bodies Bodies, which creates the potential for a lot of conflict. As anyone who has been in a group of friends knows, sometimes people don’t approve of each other’s choice of partner, even if they don’t come right out and say it.

Lee Pace plays Greg, Alice’s boyfriend who is part of the group who hang out a house hoping for a good time and a fun party. Pace played Ronan in Captain Marvel and Joe MacMillan in Halt and Catch Fire, the TV series that aired for four seasons about how the World Wide Web started.