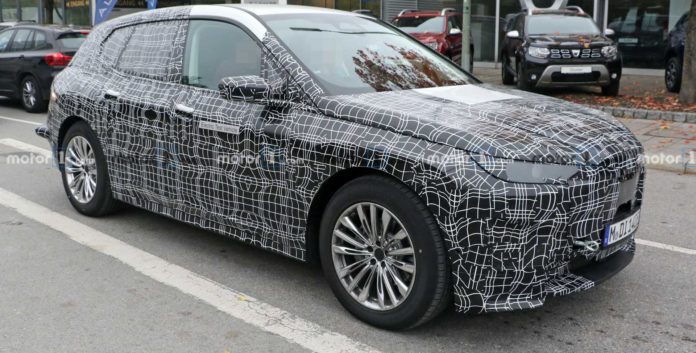 BMW’s next-generation electric car, iNext, is expected to be introduced next year, caught spy photographers on a snowy road in Sweden. Although the appearance of the electric car resembles existing BMW models, there are some differences that distinguish the car from these models.

Expected to be the next generation electric vehicle of the German automaker BMW, equipped with the latest technology, iNext was tested by spy photographers while being tested on a snowy road in Sweden. Although the company’s new vehicle does not look much different from the current BMW crossovers in terms of appearance, it should be remembered that the vehicle is still under development and camouflage in the images.

The ‘Electric Test Vehicle’ label on the door of the vehicle tells us that the vehicle under test has an electrically powered infrastructure. At this point, although the German company hides the powertrain of iNext like a secret, it aims to go 373 miles (600 kilometers) with a fully charged battery.

BMW iNext will have Level 3 autonomous driving support:
On the other hand, this range is expected to be valid only for the most efficient version. So the company can offer multiple versions for iNext, and some of these models can focus on maximum performance instead of maximum distance. Of course, it is too early to talk about the details of these models.

Another advanced technology that is expected to take place in iNext is the side window tinting to control the indoor temperature. This technology, which is generally used in ceiling glasses, keeps the temperature of the interior under control while also offering privacy.

BMW’s new high-tech vehicle will be launched in 2021. For this reason, it should be noted that the images above do not reflect the mass production version and that we can see much more changes in the vehicle.