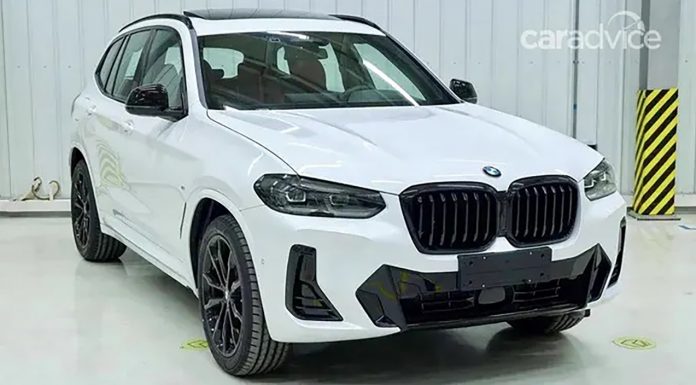 BMW X3 launch will take place in June. BMW had planned to launch the event for the new X3 in June 2021. But the 2022 model BMW X3 appeared before its launch. While the leaked images come from China; The photos showed the car to the enthusiasts from different angles.

Judging by the images shared by Caradvice, it looks like we will see a facelift version of the vehicle compared to the previous year.

As BMW plans to introduce the X3 model next month, it faced a second leak. The first leak of the new version of BMW X3 was accidentally posted on the Spanish website. In the leak published now, there are back-to-back photos showing the vehicle in detail.

The two kidneys in front are now connected, but have retained their overall size. Another update is in the new headlight design. Daytime running lights come out more sharply. The last update is to upgrade the front bumper. The BMW X3 has new shapes with trimmed bumper, which gives it a much more aggressive look than the old model.

The taillights of the model were also introduced with a renewed design and new graphics. It has a 3-dimensional shape at the outer edge. While visually increasing the width of the car, it feels quite powerful. The BMW X3 has a shape with the tailpipes seen as well.

When the BMW X3 make-up is launched, it is a question of whether the interior technologies will bring innovations with its new exterior design. We think that with the approach of the launch, more photos and information will increase.

So how did you find the new BMW X3? We welcome your ideas for comments.