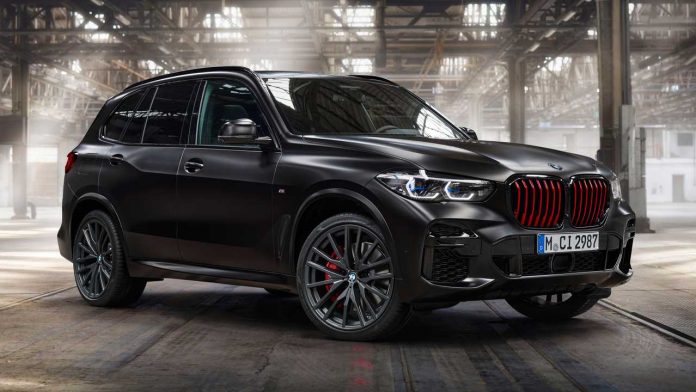 German automotive giant BMW, which frequently produces special models, has taken the X5 model this time. Called the BMW X5 Black Vermilion Edition, only 350 units are planned to be produced. Normally, the standard version of this car, which is in the luxury SUV class, is highly preferred by families. On the contrary, the 2022 model BMW X5 draws an aggressive profile with the ‘Black Vermilion Edition’.

Developed on one of the current models, the BMW X5 M50i, this special car takes its name from Vermilion, a kind of bright red color. Vermilion is known for its use in Ancient Roman decorations and Renaissance paintings. The color, also known as ‘Chinese red’, is produced from the mineral cinnabar.

The BMW Individual collection seems to have opened its doors for this car. The ‘Frozen Black Metallic’ color vehicle is one of the reasons that make it look aggressive. Red M-Performance brake calipers fill the dark gray 22-inch wheels. In addition, the adaptive M Sport suspension system is offered as standard.

The details of the vehicle are usually highlighted in red. The steep red detail on the kidney grilles, which is a BMW classic, is one of the features that come with the ‘Vermilion Edition’.

The 2022 BMW X5 Black Vermilion Edition is powered by a 3.0-liter turbocharged inline-six engine. The engine, which produces 335 horsepower and 447 Nm of torque, accelerates the vehicle from 0 to 100 in 5.3 seconds. Thanks to its maximum torque starting from 1,500 rpm, the vehicle makes the driver feel that there is always power in the accelerator pedal. Power distributed to all four wheels via an eight-speed automatic transmission makes it very easy for the vehicle to hold onto the asphalt.

The front-rear bumper is different from the standard version, and the effort of the M department is great. The exhaust system, one of the most important parts of the vehicle, is also an M Performance product. Thanks to this exhaust, a more predatory sound is obtained, while driving pleasure increases.

The interior is normally dominated by red details. The Alcantara headliner is accompanied by high-quality carbon fiber trim. Heated steering wheel, leather-wrapped instrument panel and Harman Kardon sound system, now a BMW classic, complete the vehicle’s interior. Contrary to the classic X5s, BMW designers, who added luxury as well as sportiness in the interior with the crystal gear knob, signed their signature with the special badge offered only on Edition models.

Darkened adaptive LED headlights with Laserlight were not available on the X5s until now. But in the Vermilon Edition, this technology comes as standard equipment. You might think that the blue details of Laserlight, one of BMW new design elements, contrast with the red kidneys. Despite this, it would not be wrong to say that the blue in the headlights creates a unity with the logo.

Production of the BMW X5 Black Vermilion Edition, which will go on sale with a base price of $ 83,295, begins in September. BMW America factory is responsible for the production of this special vehicle.

Google Assistant: It’s Getting Easier To Wake Up