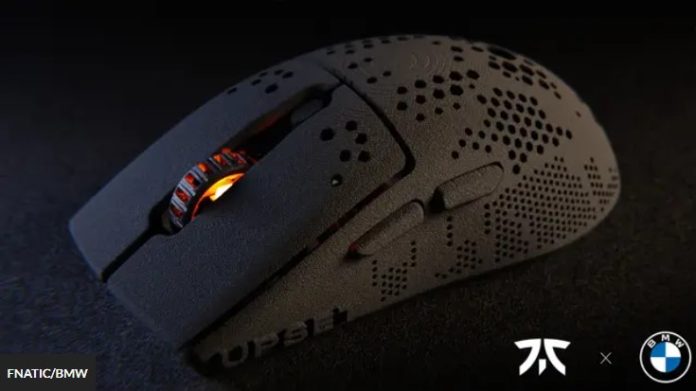 Fnatic and BMW have announced a new high-quality mouse focused on esports, each unit of which is unique for the player who owns it.

Fnatic, a major esports organization, has teamed up with BMW to start producing gaming mice specially created for their professional League of Legends team. Each mouse is divided into two parts, which, according to Fnatic, are made individually for each player.

The method used is 3D printing. Fnatic said in a press release that they chose BMW to embark on this journey because the car manufacturer has been using it for more than 25 years and also has its own esports division.

Each mouse will be printed according to the shape of the player’s hand, which will allow them to play longer without injury and increase comfort during long workouts.

Fnatic conducts research with its players, collecting information about the needs and desires of each of them. This is then transferred to a 3D printer, where a new shell is created and combined with the Fnatic Bolt mouse. Bolt is a lightweight gaming mouse designed with performance and durability in mind.

“The Fnatic x BMW Vision Mouse development project is a very good example of how we define our role in esports. Our know-how should benefit society and contribute to the further development of the industry.

“Together with Fnatic, we are really helping to improve the performance of professional players.”

Also, the press release quotes the health of “Hylissang” Iliev Galabov, a member of the Fnatic League of Legends team:

“Being able to use a mouse developed by BMW and Fnatic is great.

“The Fnatic x BMW Vision mouse is unlike anything I’ve seen before. A mouse that only fits your hand is unreal.”

Fnatic is not going to bring the BMW Vision mouse to the market in the near future, the press release says that they will do this only in case of public interest and through further testing.

It is clear that Fnatic and BMW have decided not to publish this yet because of the huge amount of work that would have to be done to ensure the uniqueness of each mouse.