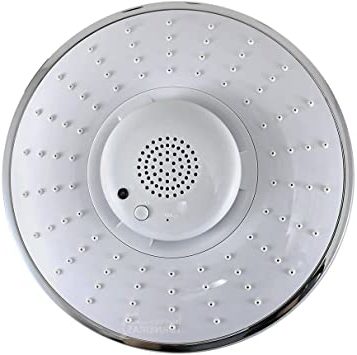 Having a shower with Bluetooth can be interesting for listening to music while bathing without worrying about getting your phone wet, for example. This is the proposal of the Musical Shower with Bluetooth 7733, which can be found in several national retail stores. The product appears in different versions, and is available for purchase in Brazil for prices around R $ 200. Music playback is due to a removable Bluetooth speaker, which can be recharged via USB cable.

The shower itself resembles a 21 x 21 cm disc, and is capable of exerting pressure between 3 to 40 m.c.a. It is worth mentioning that the system was designed to work with gas heaters, that is, it does not operate as an electric shower.

The box, in the middle of the product, is responsible for reproducing the sound in the device. Through it, the user can both listen to music and answer calls, since there is a built-in microphone in the accessory. When the shower is not in use, the speaker can be removed to recharge or even be used as a regular Bluetooth box.

There are other versions of the model, with similar design and proposal. One of them is Orbitec’s Musical Round Shower, which promises a flow rate of 12 liters per minute and high power output. Its size is smaller, 20 x 20 cm, and the manufacturer guarantees a good operation at low or high pressure. Its price in e-commerce, however, is much higher: the product costs approximately R $ 580.

Another alternative for those who enjoy listening to music while bathing is the Hydra Optima Music model. Although it does not have Bluetooth connectivity, the shower comes with an FM radio and can play music from mp3 files via flash drive or microSD card. There is also a display and a remote control to adjust the water temperature more easily. The product is on sale in Brazil for at least R $ 269.