Home Entertainment Bloodborne Kart Is Real: This Is How The Spectacular Project Of A... 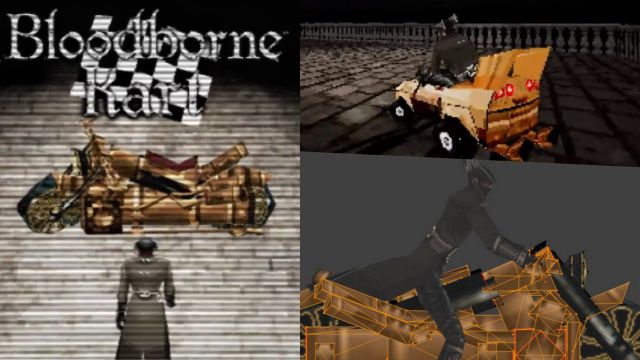 Bloodborne Kart: Cars, motorcycles and the dark streets of Yharnam. Enough to create a kart game worthy of the classics of the 90s. Don’t miss his announcement and video with gameplay.
The fans who every day show their enthusiasm and love for a certain video game as a starting point to carry out impressive projects never cease to amaze us. And the one we bring you today is very special: Bloodborne Kart, a creation with great detail inspired by the classics of the genre that we saw during the N64 and PSX generation (Mario Kart 64, Diddy Kong Racing, Crash Team Racing…). The development is already underway and soon you will be able to test it.

The creator of the project is Lilith Walther (B0tster on Twitter) who you have surely heard of on more than one occasion, as she is also responsible for the popular Bloodborne Demake and her commitment to turning From Software’s RPG into a game in the style of PSX. Enjoy the announcement trailer, in which you can see a Hunter, the game’s standard character, riding a flashy motorcycle.

Bloodborne Kart and the little details

Here is the video of a race through the streets of Yharnam. Pay attention to the musical arrangement of the creator of the project; is the melody that sounds when we fight against the Cleric Beast in the From Software game, adapted to the usual sound effects in video games of the 90s. The banner that appears is also very curious: “Pthumerian Cup”, a reference to one of the game’s Chalice dungeons. We will be able to play it on PC “when it is ready”.

Bloodborne, the action RPG heir to the Souls formula, premiered exclusively for PS4 in 2015. It later received the Old Hunters expansion along with a Game of the Year Edition. Currently, the game is compatible with PS5 thanks to backward compatibility and is also part of the titles included in the PS Plus Collection.

Jimin and Suga Take You On Their Exciting Date At The...