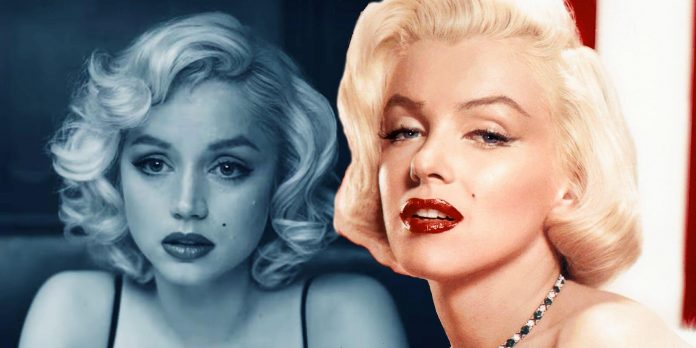 The trailer for Andrew Dominik’s Blonde, an adaptation of Joyce Carol Oates’ novel, offers the most detailed comparison yet of Ana De Armas’ performance in the film to Marilyn Monroe in real life. Blonde is a fictionalized depiction of Marilyn Monroe’s life as one of the mid-20th century’s biggest celebrities and film stars, whose famous roles include Some Like It Hot and The Seven Year Itch. Both the film and the book it is based on are steeped in controversy, with Blonde receiving the infamous NC-17 rating for “some sexual content” – a first for not only a Netflix original movie but for any streaming service exclusive film.

Netflix’s Blonde tells a fictionalized account of Marilyn Monroe’s life as she rises to become one of the most famous celebrities ever. It will not only focus on her Hollywood stardom but will also depict some of the legendary conspiracy theories surrounding Marilyn Monroe, such as her early death at only 36 years old being an assassination, as well as an alleged affair with The President (Caspar Phillipson), based on John F. Kennedy. Blonde will also portray two of Marilyn Monroe’s high-profile marriages: The Playwright (Adrien Brody), based on The Crucible’s author Arthur Miller, and The Ex-Athlete (Bobby Cannavale), based on the legendary All-Star New York Yankees baseball player Joe DiMaggio.

When Netflix released the full trailer for Blonde in July 2022, it offered the first real glimpse of Ana De Armas’ performance as Marilyn Monroe and how it compares to the real-life person her character is based upon. Blonde’s trailer, shot in a striking mixture of both color and black-and-white, depicts Norma Jeane’s struggles to play the role of Marilyn Monroe for the press and public. The Marilyn Monroe in Blonde suffers from the consequences of being typecast as the blonde bombshell, a fate many actors, Ana De Armas herself included, can relate to.

Blonde takes a major swing in casting Ana De Armas as Marilyn Monroe. Unlike the Los Angeles-born Monroe, Ana De Armas hails from Cuba. Despite this major difference, Ana De Armas appears to have captured not only Monroe’s iconic appearance but also her voice and mannerisms. Although it seems like the film is embracing De Armas’ natural accent rather than relying on her using a Marilyn Monroe affectation, she is still able to capture Monroe’s signature breathy voice. The technicolor recreations of Monroe’s movies within the film are also uncanny, especially Gentlemen Prefer Blondes, showing that De Armas has been able to perfect Monroe’s mannerisms to a tee.

How Ana De Armas Transformed Into Marilyn Monroe For Blonde

Ana De Armas studied the real-life figure endlessly to be able to transform into Marilyn Monroe for Blonde, on top of presumably being in the hair and make-up trailer for hours on end every day while filming. Ana De Armas stated that to get into character, she studied any material she could get her hands on, including films, audio recordings, videos, and “hundreds of photographs” of Monroe. She also stated that every scene in Blonde is “inspired by an existing photograph,” and the thought of what Norma Jeane was feeling was always at the forefront of her mind during filming. Ana De Armas also had the added complication of shifted production dates on No Time To Die due to Daniel Craig sustaining an injury. While filming for her fantastic scene as Paloma in No Time To Die was delayed for three months, De Armas went back to Los Angeles to film Blonde, despite her characters in the two films being so different. This makes her utter transformation into Marilyn Monroe in Blonde all the more impressive.

How Accurate Is The Story Of Ana De Armas’ Marilyn Monroe?

As stated above, Blonde is not a traditional biopic but instead an adaptation of a book whose own author calls it a work of fiction. Instead of outright naming many of the characters, Blonde credits many of its major characters by their occupation, such as The President and The Playwright. This again implies that Blonde will lean into its own adaptation of Marilyn Monroe instead of trying to replicate her life and career entirely as a biopic would. This is not surprising given that Blonde’s director, Andrew Dominik, has previously dabbled in a fictionalized retelling of a real-life story with his 2007 film The Assassination of Jesse James by the Coward Robert Ford. However, this does not mean that Marilyn Monroe’s story in Blonde is entirely made up. Real-life scenes from the Blonde trailer include the premiere of Gentlemen Prefer Blondes, the filming of the subway grate scene in The Seven Year Itch, and Monroe serenading JFK on his birthday. Although Blonde‘s story may not be a traditional retelling of Marilyn Monroe’s life, with its director comparing it to the more unorthodox real-life adaptations of Raging Bull and Citizen Kane, Ana De Armas’ performance looks like it will truly capture both the appearance and spirit of Marilyn Monroe herself.

Starfield has more hand-crafted content than any other Bethesda Game