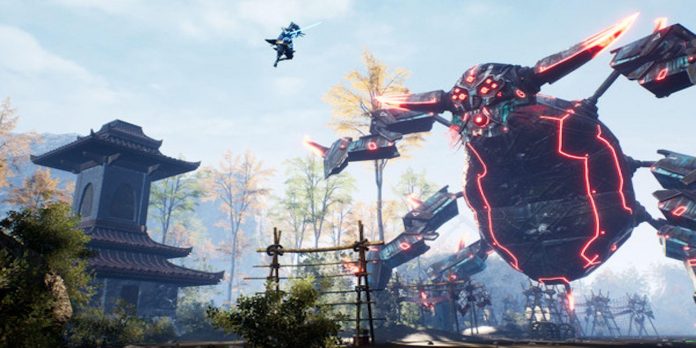 Dressed in a neon fringed coat and a samurai mempo mask, breaking through groups of robot enemies, it may not be immediately obvious that the main character of the upcoming side-scroller Blind Fate: Edo no Yami is completely blind. For the developer of Troglobytes Games, this is the main feature of the game — the task of navigating the sci-fi urban space with only four of the five senses.

In addition to this feature, Blind Fate also offers a variety of enemies modeled after creatures from Japanese folklore, carefully recreated by Barcelona Troglobytes. Game Rant met with studio head Saverio Caporusso to talk about how the mechanics of Blind Fate and the game world combine to create a new innovative experience for players.

In Blind Fate, information is King

Obviously, the player’s blind character creates a lot of problems in the gameplay. According to Caporusso, the main one is the intersection of the environment.

“The main character is a cybersamurai, so his brain can receive all kinds of data about the environment. You can see a static image of the game environment around you, but this image is not updated.”

For example, a player can approach a chasm that, according to the latest collected environmental data, has a bridge spanning the chasm. However, the bridge could collapse, and without updated data, an unpleasant surprise awaited the player. To solve this problem, the player collects environmental data from Blind Fate robot enemies. “Enemies have updated information about the environment, so by defeating enemies, you collect data that will help you progress,” Caporusso said.

Of course, fighting enemies in the game is another problem for the main character, who can’t actually see them. According to Caporusso, the player can track enemies using a set of high-tech sensors that pick up various types of stimuli. The hearing module detects enemies by loud footsteps or the buzzing of mechanisms, enemies emitting a unique smell are detected by an odor sensor, and the thermal sensor can display the thermal cores of certain enemies. Players must learn how to combine sensors with different types of enemies in order to deploy them effectively.

According to Caporusso, when the developers started working on Blind Fate, the player character initially had to rely mainly on sound as a means of detecting enemies. “Of course, you’ll be able to hear enemies approaching you, so some kind of sound sensor was an easy choice.” According to him, the decision to diversify and add more types of sensors was made to improve the overall experience of players.

“Just turning one sensor on and off doesn’t make the game interesting, so we figured out how to silence some enemies.”

According to Caporusso, in addition to the unique mechanics, Blind Fate differs from other games of this genre in the design of enemies. In accordance with the futuristic Japanese aesthetics of the game, hordes of robots thrown at the player are modeled after creatures from ancient Japanese folklore. To develop each character, Troglobytes hired a writer who was tasked with researching Japanese folk tales, especially about ghosts and demons, youkai and kami. According to Caporusso, the screenwriter also had to find the purpose of these enemies and how they fit into the real gameplay.

“We find yokai and other folk tales with an interesting backstory, find out how it works in the game, and create a suitable model.”

For example, in Blind Fate there is an enemy known in Japanese folklore as “wa nyudo”, or the priestly wheel. In the traditional Japanese canon, it was a yokai that appeared as the head of a priest inside the flaming wheel of a cart designed to hunt criminals. According to Caporusso, in “Blind Fate”, va-nyudo was turned into a futuristic police android with a policeman’s head inside a wheel with flashing lights.

Even the basic elements of the game get this folklore treatment. The Blind Fate Skill Tree is a cybernetic version of the entity known as jubokko, a tree that in Japanese fairy tales grew on battlefields and fed on the blood of fallen soldiers. As Caporusso said, “Our skill tree is a real tree.”

According to Caporusso, despite its unique appearance, the enemies created in the game belong to traditional classes familiar to players, such as rangers and tanks. “We wanted the enemy types to be recognizable by the players, because it’s risky for an indie studio to change them.”

Blind Fate: Edo no Yami will be released soon on PC, Xbox One and Xbox Series X/S.