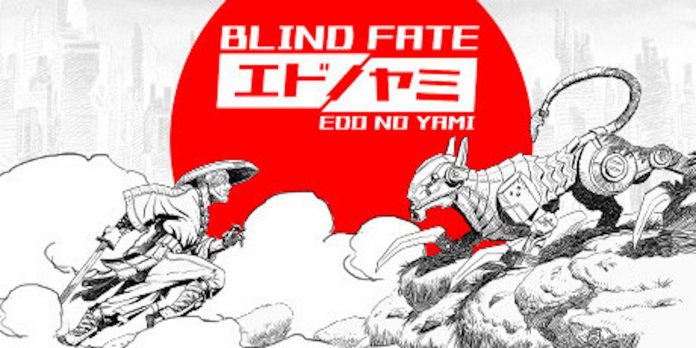 Like most forms of art, video games are a conversation. Developers are doing their best to add their own voice to the discussion with revolutionary concepts and innovative mechanics. For Troglobytes Games, the studio behind the upcoming game Blind Fate: Edo no Yami, the drive to bring something new to the gaming industry conversation has resulted in a particularly unique contribution.

A side-scrolling samurai game set in a sci-fi urban landscape, Blind Fate could easily be another addition to the fast-growing samurai subgenre, but Barcelona-based Troglobytes has added its own innovative talent. The protagonist of Blind Fate, a cyber samurai named Yami, is completely blind — players must rely on environmental cues and an arsenal of specialized sensors to navigate the environment. Game Rant met with the head of the studio Saverio Caporusso to talk about how this unique mechanics works, and about the use of Japanese folklore by the development team when creating the game world. The transcript has been edited for clarity and brevity.

Q: First of all, tell me a little bit about yourself and about Troglobytes Games.

A: My name is Saverio Caporusso. I am Italian, but my studio is located in Spain, where I have been living for about 13 years. As a child, I was always interested in old arcade machines with a coin receiver, and I was also interested in role-playing games with pen and paper, such as Dungeons & Dragons. About five years ago, together with friends from Italy who had experience in the gaming industry, I founded Troglobytes Games in Spain.

The first game we released was Hyper Parasite. After this game was launched in 2020, we were thinking about what to do next, and we came up with the idea of Blind Fate: Edo no Yami, which is published by 101XP and will be released very soon.

Q: I’m wondering, if you and your colleagues are from Italy, why move to Spain to open a studio?

A: When we founded Troglobytes Games, I was already living in Spain, working at another job. When my friends and I got in touch about the studio, we decided that the gaming industry in Spain is a little better than in Italy. Over the past six or seven years, we have been able to grow in Spain much more than in Italy.

Q: Let’s move on to the Blind Fate gameplay. What kind of game can players expect?

A: Blind Fate is a side—scroller featuring a blind protagonist. The game has innovative mechanics — a blind character creates a lot of problems. The main character is a cybersamurai, so his brain can receive all kinds of data about the environment. You can see a static image of the game environment around you, but this image is not updated. For example, the bridge that you see in the static image in front of you could collapse, and you could fall because you don’t know that this bridge no longer exists.

So, one of the key points of the game is collecting data from enemies, which are robots. Enemies have updated information about the environment, so by defeating enemies, you collect data that will help you progress.

Fighting enemies is another challenge for a blind character — most enemies are invisible to the player. The game uses various types of sensors to help detect enemies. Each sensor allows players to detect various stimuli. If an enemy is walking, the player can hear footsteps using an auditory sensor. Some enemies can be detected using an odor sensor. There is also a heat sensor that will allow players to see the heat core of enemies approaching them. If you don’t use the right sensor for the type of enemy, you will end up getting hit.

Blind Fate offers innovative mechanics, but we also wanted the game to have an interesting setting, that is, Japan. We were inspired by games like Sekiro: Shadows Die Twice and Ghost of Tsushima. The game has the aesthetics of Japanese science fiction — it is science fiction, not cyberpunk. All the enemies of Blind Fate are based on Japanese folk tales. We used enemies called yokai and kami, ghosts and demons in Japanese folklore.

Q: I’m interested in learning a little more about the role of feelings in Blind Fate. I know you mentioned Sekiro and Ghost of Tsushima as sources of inspiration, but where did the idea of this unique mechanic come from?

A: Well, with the blind protagonist, we had to think about how players would be able to detect enemies. Of course, you’ll be able to hear enemies approaching you, so some kind of sound sensor was an easy choice. But simply turning one sensor on and off doesn’t make the game interesting, so we came up with the idea to keep some enemies silent. These types of enemies give the player character a different type of hint, which he can see with a different sensor. It was an early concept, and we refined it using various methods.

Q: You mentioned earlier that the game draws inspiration from Japanese folklore. How was the process of developing new characters?

A: It was pretty easy for character development.

Tesla gigafactory in Shanghai is preparing for export in the third...