Home Entertainment Black Phone: Explanation of the origin and meaning of the grabber mask 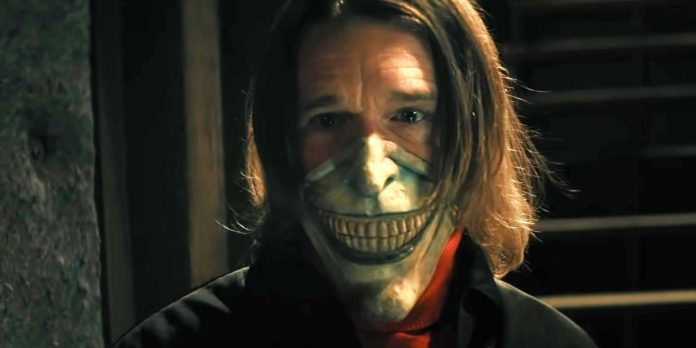 The screenwriter of “Black Phone” K. Robert Cargill discusses the origin of the Grabber mask and its significance for establishing the character’s backstory. Once again teaming up with “Doctor Strange” director Scott Derrickson after the success of “Sinister” in 2012, the pair adapted Joe Hill’s terrifying story for the big screen. “Black Phone,” starring Ethan Hawke, as well as an outstanding young cast that includes Mason Thames and Madeleine McGraw, received positive reviews, and the box office was incredibly successful, grossing more than $23 million domestically in its first weekend.

“Black Phone” tells the story of a mysterious Grabber (Hawk), a serial killer who kidnaps children and keeps them imprisoned in his basement. His latest victim, Finnie (Thames), discovers that the disconnected phone on the wall can contact the spirits of the Grabber’s previous victims, who eventually help him escape. However, what distinguishes a Grabber from an ordinary villain is his not-quite-white mask, consisting of separate parts joining together, with horns, a creepy toothy grin and a deeply frowning mouth. At every encounter between Finney and Grabber, Hawk’s character wears a mask in various variations.

During a recent interview with THR, Cargill talked about the origin of the Grabber mask and how it was an integral part of the overall character. The writer reveals that the idea of the mask actually came about as a result of an initial discussion with Hill about changing the villain from the source material in which he was a clown. The writer discusses how Hill then shared an alternative idea inspired by the magicians of the 30s and 40s. As for the interchangeable nature of the mask, Cargill shows that this ultimately serves as a reflection of his personality, which the Grabber could then change depending on which part of his “ritual” he participated in. Check out Cargill’s discussion below:

In the story, the character is a clown, and after reading the first draft, Joe Hill came to us with a hat in his hands with my fault. He said: “It’s a difficult question, but when I wrote this story, it was 20 years after it came out [Stephen King]. No one was thinking about clowns, but I was thinking about John Wayne Gacy. So there wasn’t a real comparison at the time, but now that [2017] is a big hit, people will feel like I’m imitating my dad with another clown. So can we change that?” And we’re like, “Yes, of course we can, but why?” And that’s when Joe said, “I have a great idea for this whole magic show from the 30s and 40s, when magicians dressed up like magicians half the time, and then in the other half they dressed up like the devil and do other tricks like the devil. So I thought it would be really cool.” And we’re like, “Yeah, that’s cool. We like it. Let’s do it.” And that’s where Scott turned into a mask. […]

Yes, and each mask is also the character he plays. It’s really a thing. In the film, he is asked if he killed all the other boys, and he replies, “No, it was someone else.” Thus, each mask represents for him a separate part of the ritual and another aspect of his personality. It was something Scott came up with because he said, “Well, we have to get him to show emotion in some way, and you can’t really show emotion under a mask. And if he had a replaceable mask, and depending on the mood of the ritual, he would change the lower part of the mask?” So it turned into what is now an exciting visual representation of this character.

Praise for Hawke’s performance as this terrifying villain has been constant throughout the reaction to “Black Phone,” and the film’s younger actors have also been widely recognized for their portrayals. Given the wealth of backstory that “Black Phone” teases, the film’s incredibly warm reception has generated various conversations about a sequel, with some hoping to see a prequel that focuses on the Grabber and its intricate motives. Derrickson recently teased the exciting possibility of a sequel to “Black Phone,” revealing that he would be willing to move forward with one if audiences reacted well to this movie first.

The Grabber Mask has become the centerpiece of the “Black Phone” advertising campaign, given its creepy nature and instantly memorable appearance, so it’s certainly interesting to find out what inspired her to create this piece. Having played such a key role in the general knowledge of Hawke’s character, it remains to be seen what the creative team behind the Black Phone has in mind to demonstrate its origins on screen and in the universe. Perhaps its variations can even be expanded if Derrickson and Cargill decide to continue developing The Black Phone 2.

Rumor has it that Henry Cavill will show up at Comic-Con...