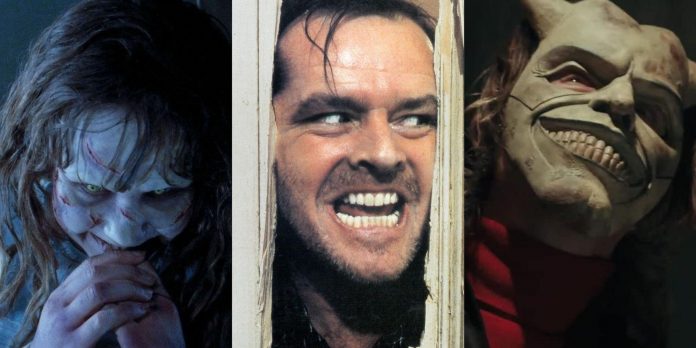 The Black Phone has reignited viewers’ love for both masked villains and classic horror, with many fans leaving the movie theater feeling satisfied. The thriller is said to abandon outdated jump scares and instead provide viewers with a solid plot driven by well-written characters, retaining engagement throughout.

Ethan Hawke’s villain role sees him masked up as his character The Grabber terrifies fans way past its runtime, but there are still some movie villains that are hard to beat in terms of a fear factor. From baddies who are not named out of fear to a shy teen gone evil, these antagonists prove to set the curve for what’s considered truly scary.

Nothing quite says villain like an antagonist so feared that they are often referred to as ‘he who shall not be named’, but Voldemort proved to live up to the anxiety he created. Whilst both Harry Potter and The Black Phone have a somewhat supernatural vibe, Voldermort exceeds the evil shown by The Grabber due to his desire to wipe out anyone that threatens his immortality.

RELATED: 10 Life Lessons From The Harry Potter Series, According To Reddit

Voldemort may have his army of faithful supporters, but that didn’t mean they were safe from his wrath, as he would often turn on anyone he felt betrayed him. His huge ego encourages him to enjoy being evil, especially when characters bow down to the potential carnage he can cause!

Annie Wilkes is one of the best female movie villains to grace viewers’ screens, while also being the most panic-inducing kidnapper. Misery tells the story of Paul Sheldon, who finds himself in a car accident, but he is soon rescued (or as some fans might say, imprisoned) by Annie.

The Grabber and Annie might not seem that dissimilar, with both looking like everyday people once The Grabber removes his mask, but Annie proves to inspire more terror. Annie abandons her caring nurse nature and instead becomes a torturous tyrant that viewers wouldn’t trust with a hammer. Her saint-like status as a nurse led fans into a false sense of security, making her all the more villainous as the movie revealed her obsessive nature and the lengths she would go to to keep Paul for herself!

Carrie White is possibly one of the most unsuspecting characters to turn villainous, and although her character truly terrifies fans, some also believe that her victims had it coming.

Whether it’s her vengeful stare or her fiery venom, Carrie White transformed into a violent villain that turned the tables on everyone who made her feel insignificant, including her mother. The reason why Carrie is considered such a terrifying villain is due to the real horrors it represents, it encourages viewers to root for the ‘bad’ guy even if that means carrying out bloodied and frenzied attacks that result in fans questioning their own morals.

Pennywise is one horror character surprisingly inspired by actual events, making his role even scarier than The Grabber, despite both of them attempting to lure children. Whilst the two characters are known for their obscure appearances, Pennywise has become a highly recognizable movie villain, responsible for the rise in a fear of clowns.

Pennywise terrifies its characters through his high pitch playful tone that cleverly contrasts his brutal approach. The cunning clown exploits children and their attraction to safety before killing them, as seen when he savagely attacks Georgie, which was enough gore for some fans.

In recent years, children have become a scare tactic employed by producers to toy with viewers’ perception of childhood innocence, and the character of Esther in Orphan certainly puts that concept to test. Esther may represent the same otherness as The Grabber’s character in The Black Phone, but she has proven to scare viewers a little bit more.

The young-looking protagonist hid scarring from the straitjacket in which she was placed after her violent outbursts, which led to her having a kill count of at least seven. But her manipulative nature often saw her escape from serving justice as she consistently utilized her young looks as a disguise that rendered her unable to carry out such graphic acts of violence.

The Nightmare On Elm Street series created one of the scariest supernatural slasher villains in cinematic history, with his name still giving many fans goosebumps. Freddy Krueger played on the idea of nightmares as he occupied the role of a dream demon, often snatching young victims from their beds and killing them in their sleep.

Freddy’s overall appearance represented what viewers imagined pure horror to look like, with his famous taloned glove, missing teeth, and iconic snarl intensified by his torn skin. However, it was his desire to haunt his victim’s dreams which ignited that bedtime anxiety in many fans, who were petrified about being sucked into their beds and torn up by the evil monster that stalked their dreams after watching.

The Exorcist is considered one of the scariest movies ever made, with many die-hard horror fans advocating that its plot alone became a blueprint for later horror movies. This heart-racing flick follows Reagan, who seems like a helpless young girl with a monster trapped inside her. But as the story progresses, it becomes increasingly difficult to distance her vulnerable image from her unnerving behavior.

The movie employed the same use of makeup as The Grabber to present viewers with a character who was visually terrifying, but it was graphic scenes of violence that cemented her role as one of the scariest movie villains.

Michael Myers has become a well-known character within the horror industry and has truly cemented himself as one of the founding fathers of slasher horror.

His famous mask has become something of a staple that increases the fear fans feel towards his character, as it allows for any emotion to be hidden, making his killings more sickening through his senseless manner. However, it is also his lack of voice that sees him personify a ghost-like figure that moves surprisingly fast compared to his victims, abandoning the need to lure his target, unlike The Grabber.

When ranking every Stanley Kubrick movie in terms of re-watchability, it’s safe to say that The Shining would occupy the top spot due to Jack Torrance’s unpredictable personality captivating fans. Whilst the movie’s use of music and lighting does an incredible job of creating fear, it is Jack Nicholson’s performance that lefts fans fearful of bathroom doors and much more.

His character symbolizes a man that has lost all sense of humanity as his isolation from the world and the spirits that supposedly haunt the hotel drive him to violence, resulting in him slowly becoming the villain he grew up with. His character’s frenzied attacks and complete lack of empathy frightened fans, but it was the realization that Jack’s change in personality could happen to any viewer that really left them with chills.

Hannibal Lector (The Silence Of The Lambs)

Hannibal Lecter is one of the scariest movie villains to date. Anthony Hopkins brought the terrifying serial killer to life without relying on a costume like The Grabber, and instead, Hannibal Lecter represented an intelligent man who, on the surface, seemed well-mannered and calm-natured.

However, viewers soon realize why this placid man is locked up in a maximum-security unit that requires him to wear a muzzle as well as restraints. His seemingly subdued nature, cleverness, and politeness made his cannibalism even more disturbing, which is the main reason why Hannibal Lecter haunted so many fans.