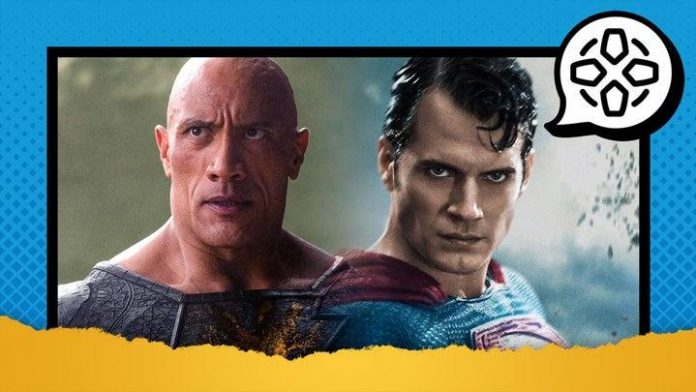 One of the hot topics among DC fans heading to Comic-Con in San Diego was whether Henry Cavill would suddenly show up to announce that he would be playing the role of Superman again. Those hopes were dashed when he didn’t appear on today’s Warner Bros. panel, leading to speculation that someone else might be wearing the famous cape.

Johnson seemed to confirm that Cavill would not be returning to the DCEU when he answered the question of whether Black Adam could defeat Superman in a fight.

“That’s a great question… don’t threaten me to have a good time because I’ll answer that question,” Johnson said. “Well, I’ll tell you how you guys know, because we were all deeply immersed in this mythology, and it was the age-old question of who would win the battle between Black Adam and Superman. Pound by pound, they’re pretty close. I guess it all depends on who’s playing Superman; I’ll just say it. I’ll stop there.”

John’s response caused discontent, as it seemed that the role was open, and Cavill would no longer play Superman. The director of “Black Adam” Jaume Collet-Serra also confirmed that neither Superman nor Shazam will appear in “Black Adam”.

“Our film is an original story. By the time the movie ends, he doesn’t know who Shazam or Superman is,” Collet-Serra told Deadline.

However, Johnson still hints that Superman may return to the DCEU sooner rather than later, even if he is played by another actor. In a conversation with IGN, Johnson mentioned who else besides Superman when asked what the change in the “hierarchy of power” in the DC universe really means.

“The one who sits at the top of the DC universe is Superman. The one scratching his back is Black Adam,” Johnson said.

When asked if this dynamic will continue after the film, Johnson said: “I think so. Superman.

“And I always like to remind people that Superman has two weaknesses: kryptonite and magic. Black Adam, one of his anchor powers is magic. There are many other elements involved here, but I’ll tell you this was one of them. one of the most enjoyable moments in the creation of Black Adam. And I’m right there with all the fans — what if? What if this happens? What if this guy meets this guy? Or what if this guy meets this woman? What if.”

Every new DCEU character according to Peacemaker

Anyway, Superman remains in the spotlight of many DC fans. Cavill’s version of the character last appeared in 2017’s Justice League, but Snyder’s 2021 version helped bring him back into the spotlight. Cavill himself has vowed that he is “still Superman” and that he has not turned down the role.

At the moment, Superman is still missing from the action, and Comic-Con in San Diego has done little to clarify the character’s future in the DCEU. But hey, there’s always Superman and Lois, right? In the meantime, keep an eye on everything that was announced during Comic-Con 2022 in San Diego as the show continues.