BitMEX and its founders faced a new lawsuit due to many allegations such as money laundering and market manipulation. Păun Gabriel-Razvan, who was in Romania, filed a lawsuit, accusing the BitMEX exchange of manipulation.

Păun Gabriel-Razvan sued BitMEX in California. BitMEX exchange co-founders Arthur Hayes, Ben Delo and Samuel Reed and others, allegedly including HDR Global Trading Limited, have illegally made billions of dollars in profits through blackmail and manipulation. According to The Block Crypto, this new case came after a similar case filed by Dmitry Dolgov in Moscow. In the news, it was learned that both plaintiffs were represented by the same lawyer.

Speaking to The Block Crypto, BitMEX spokesperson claimed that attorney Pavel Pogodin had slandered BitMEX and others in the cryptocurrency industry. The spokesperson stated that Pogodin filed complaints with false and false information and believed that these slanders would be understood by the court.

The plaintiff alleged that BitMEX was also used extensively by people engaged in illegal activities such as tax evasion, hacking, smuggling, and drug dealing.

Money laundering scheme has been made

In the money laundering scheme described in P davaun Gabriel-Razvan’s case file, there is a statement of the parties involved in illegal activities such as funds acquired by the money launderer through manipulation, BitMEX seized funds and anonymous accounts. At this point, the $ 427 million in the insurance fund on the BitMEX exchange was considered embezzlement. 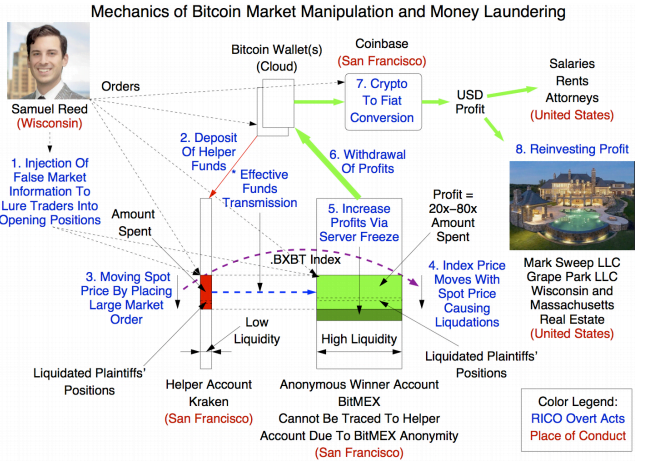 The scheme in the case file is explained as follows:

“A money launderer (defendant) opens two stock market accounts. The first is an account that is opened on one or more exchanges (Coinbase, Kraken, BitStamp) through a BitMEX account, which allows to calculate the index price. The second is an anonymous account called the “winner” account. The money launderer runs a highly leveraged trade on BitMEX and executes the market order with the maximum slip rate to move the index price in the proper direction ”.

See Also
Possible Effects of the BitMEX Incident on Bitcoin

Trump, exposed to Coronavirus. Who he had contact with