Bitcoin (BTC) price rose above $ 15,500 again during the day. Commenting on data obtained from an analysis site, Cointelegraph site author Joseph Young wrote that Bitcoin whales have made the largest sale of Bitcoin (BTC) since March, linking the rise in price.

Commenting on the graphic “All Exchanges Inflow Mean” of CryptoQuant, a graphical analytics site, Young claimed that Bitcoin whales sold large amounts of Bitcoin. The BTC / USD parity, which allegedly declined during the day, recovered for this reason and started to watch over $ 15,500 again. 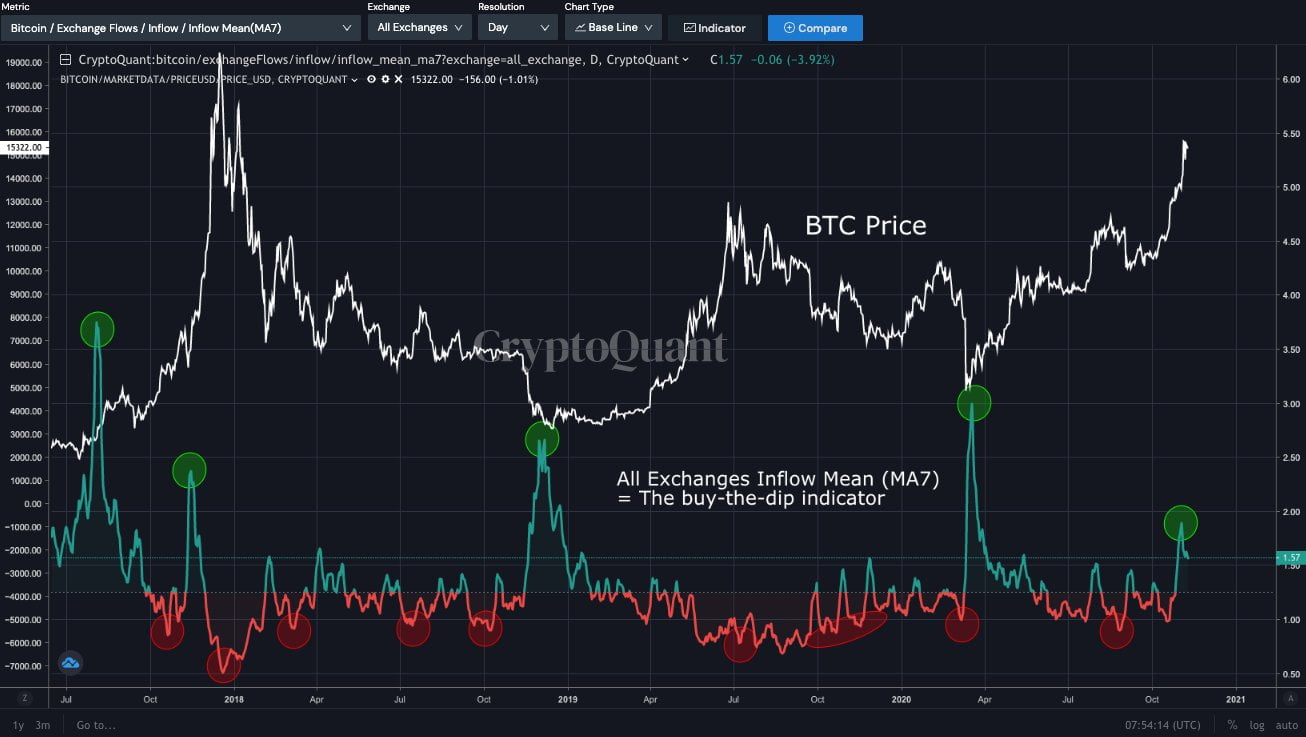 According to CryptoQuant’s chart, the “MA7 indicator” has approached 2 levels again in recent days. Young claimed that such a play took place because Bitcoin whales have been selling large amounts of BTC in recent days.

This indicator showing the intensity of whales selling rose to 3 on March 12, when the price of Bitcoin fell to $ 3,700. Since then, it has never exceeded 1.7.

The fact that whales have started reselling doesn’t have to be interpreted as a bearish sign. Because, according to the analyst, Bitcoin bulls sometimes sell only to withdraw the money they earned during the bull run, not because they believe the BTC price will go down. Historical data show that the BTC / USD parity started to move up in the medium-long term after this intense sales period.

BTC / USD parity experienced big decreases on 8 November and 10 November, but prices started to rise again. As of 16:04, the leading cryptocurrency is trading at $ 15,596.

Bitcoin analysts continue to give bullish predictions in the medium and long term. Although Bitcoin whales have begun to sell, analysts think that Bitcoin may gain several times over the next year, especially.

Crypto Dog, one of the famous analysts, signaled a new bull run in 2021 in yesterday’s post. The analyst said the only difference between 2017 and 2021 is that Bitcoin will be valued much more this time around.

The only difference between 2017 and 2021 is that we're going to pump it 100x higher this time pic.twitter.com/uHyzBXeShi

KENDALL JENNER IS ACCUSED OF MISTREATING HER DOG

Tether Blocks $ 300K USDT and Delivers it to the State