The Bitcoin price has lost more than 10% in value last week, and many elements of the rapid rise for BTC this time have had the opposite effect for Bitcoin. Bitcoin, currently traded at $ 10,100, declined below $ 10,000 at the close of the week.

For Bitcoin, the first half of 2020 has been quite successful. Combined with interest and monetary policies pursued by central banks and people’s investment concerns in traditional currencies, Bitcoin became an attractive asset to invest. The price of Bitcoin, which dropped to $ 3,858 in early March, exceeded $ 12,400 in August, reaching the year’s record high. However, Bitcoin, which experienced a sharp decline in September, also affected the entire cryptocurrency exchange.

Last week, this sharp decline was reinforced as the dollar’s depreciation, which was one of the reasons why Bitcoin soared, began to recover. The US economy started to recover without additional monetary support, which led to a course against BTC. As predicted by experts and market analysts, Bitcoin dropped below $ 10,000 last week, which is a significant threshold. Experts are now “Will the Bitcoin price go down?” They answer the question by referring to several different factors.

One of the most important factors in front of the probability of Bitcoin price falling below $ 10 thousand this week is that the US dollar has started to recover. The dollar fell out of favor, with both its losing value against the euro and the sharp decline in circulation speed.

Despite the Fed’s policies to keep the interest rates and inflation above average, the dollar entered an upward trend. The reason for this by experts; With the unemployment rate falling to approximately 8% in the USA, it is shown as the decision of investors to sell the stocks they hold. With this performance of the dollar, the demand for safe havens such as BTC decreased; this may result in a withdrawal below 10 thousand dollars on the Bitcoin front. 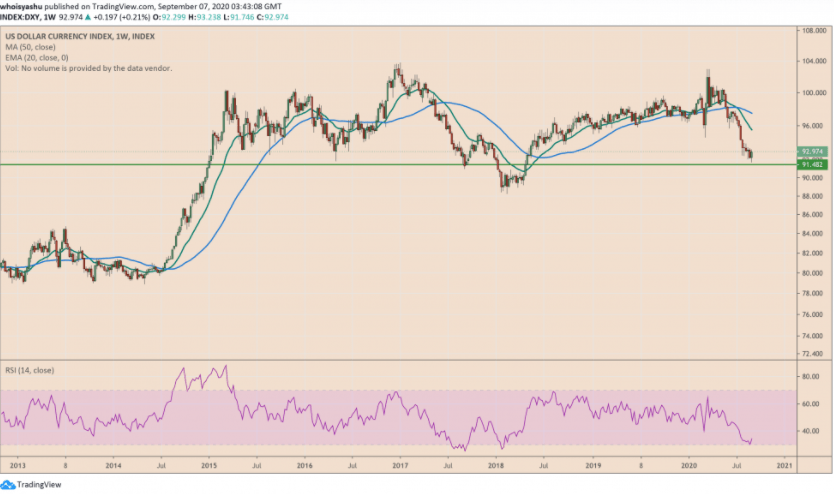 According to experts, another reason why Bitcoin fell below the $ 10 thousand threshold is the possibility of the outrageous aid packages being shelved in line with the improving graph of the US economy. It is known that the US Congress will meet at the end of the month to discuss the new aid packages. Many investors and experts anticipate that money injections made with packages will have a negative impact on the economic course. It is thought that American investors are aiming to keep the dollar above the support zone to avoid this scenario. This is seen as a phenomenon that makes it less likely to catch an uptrend for Bitcoin again.

Movement Towards CME Gap Can Be Observed

The CME gap observed in the Bitcoin charts in mid-July plays an important role in the decline of the Bitcoin value, according to some experts. Emphasizing that the missing candle in the charts is at the level of $ 9,665, analysts think that BTC will tend to fill this gap in the next moves.

CME gap refers to the gap created by the CME Group, which closed at the weekend, unlike other crypto money exchanges, in the charts due to the BTC movements during this closing. While there is no set rule, BTC in general tends to close this gap. This is one of the developments cited by experts in anticipation of a drop in Bitcoin price.

According to Geekbench Results, Xiaomi Mi 10 Pro Is Better Than...

Do not trade Bitcoins on these phones

Jeongyeon to Sit at the Group’s Online Concert

Jungkook reveals what his favorite word is and why it’s so...