Bad weather, heavy rains, and floods in China’s Sichuan province dropped the Bitcoin hash rate by 25 percent. As Bitcoin mining is largely based in China, this development in the country also affected the Bitcoin network.

China’s Sichuan province has been battling the bad weather of the monsoon season since last week. The city, which is especially preferred by Bitcoin miners for its cheap electricity, nowadays suffers from bad weather and rains. Heavy rains caused floods in Sichuan. Hydroelectric power plants in the city were insufficient due to floods and floods and power cuts started to occur. Bitcoin mining companies deployed in Sichuan were temporarily suspended and the Bitcoin hash rate dropped by almost 25 percent.

More than half of the total hash rate in the Bitcoin network is provided by China-based mining facilities. Sichuan, which is home to the world’s 4 largest mining companies, is experiencing power, internet and communication outages due to floods and floods. The interruptions are reducing the processing power of Bitcoin miners. Sichuan is a place where the Bitcoin network realizes 50 percent of the total processing power. Therefore, the monsoons in the region directly affect the Bitcoin hash rate. Due to recent floods and floods, the daily Bitcoin hash rate has decreased by 10 to 20 percent. 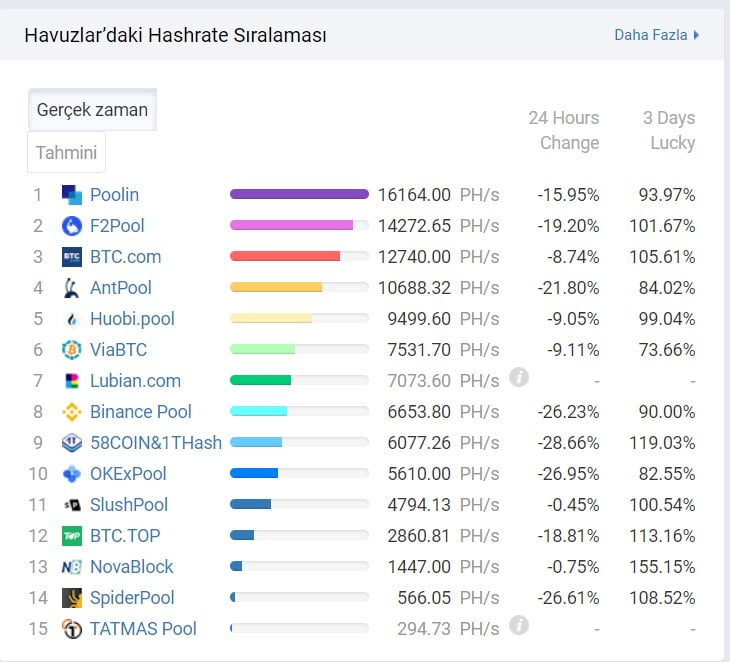 Kevin Pan, Chief Executive of Poolin, one of the largest Bitcoin mining pools, said bad weather in the region reduced the hash rate in the Bitcoin network. “We stopped some operations due to electricity and internet disruptions that also affected mining facilities. In addition, during the floods, we had to evacuate the staff at the facility as part of security measures. ” explained in the form.

Due to bad weather conditions, Poolin’s Bitcoin hash decreased from 20 EH / s to 16 EH / s, and it fell by 20 percent. The same decline was observed by 20-25 percent in other major mining companies in Sichuan.

Bitcoin hash values ​​have declined from an average of 123 EH / s to 110 EH / s in the past three days. As a result, the decrease of 3 percent in the Bitcoin hash network in the last seven days increased to over 10 percent. During this period, the average highest hash rate was 127 EH / s.

Monsoon both Advantages and Disadvantages

The monsoon season makes China attractive for Bitcoin mining companies. Because especially in states such as Sichuan and Greece, hydroelectric resources are fed very quickly thanks to rain. The energy surplus generated by hydroelectric power plants is reflected in Bitcon miners as cheap electricity. Monsoon, which was seen as an opportunity at first, started to turn into a nightmare with the increasing density of mining companies in the region. Floods, floods and heavy rains experienced due to unpredictable weather conditions have made mining facilities inoperable. Mining facilities caught unprepared for monsoon in recent years suffered serious losses and had to withdraw from the region.

Bentley will produce only 12 cars in the world

US Congressman: “Ripple (XRP) Is Not A Stock”

BTS: This would be the Perefect date for Jin. How romantic!

Next to Xbox Series S: Series X the small images