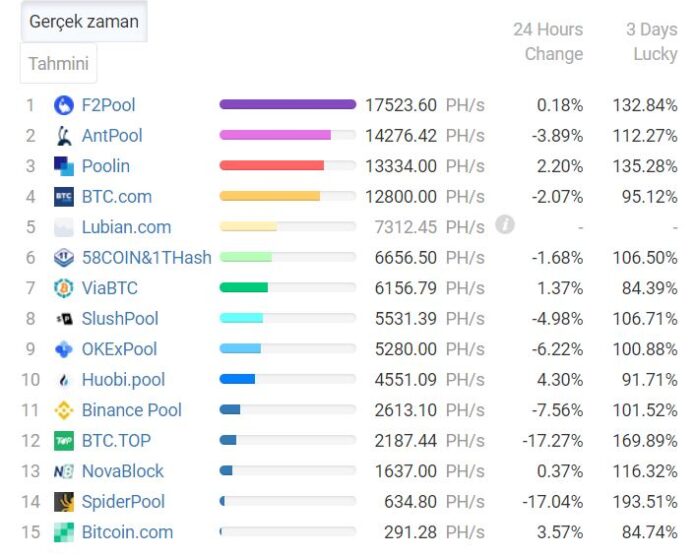 After the block prize halving, which took place a few days ago in Bitcoin, a mining pool, which was first heard, became one of the biggest and nobody knows who it belongs to.

After the block prize halving in the previous day in Bitcoin, a mining pool that was unknown and named for the first time became one of the largest.

The mining pool is a network where miners combine their processing forces to generate Bitcoin. In this network, miners earn income based on the amount of work they contribute to the possibility of finding a block.

The most well known mining pools can be listed as F2Pool, AntPool, Poolin, BTC.com, ViaBTC, SlushPool and cryptocurrency exchanges such as Binance, Huobi and OKEx. These pools have the biggest share in Bitcoin mining.

After halving, a new one joined among these pools and placed on the 5th place as soon as it became visible. This pool, called Lubian.com, looks like China, like many others. What is interesting is that almost no one has heard of this pool before and does not know who it belongs to. It was determined that he removed the first block of the pool on April 24. It is stated that in the last week, 5.67 percent of the blocks were removed.

Lubian.com currently accounts for 6.2 percent of the global Bitcoin hash rate. It is stated that the pool was previously named “Buffett” but after block 629,755 it was changed to Lubian.com. Lubian brought with it many speculations. Some say it may have been set up by Bitmain’s former employees, while others may be related to Binance. However, people close to the two companies denied these allegations. Since there is no big decrease in the hash rate of other pools, it is not considered as a possibility to have a pool separated from them.

Finally, the pool is considered to be a private mining pool.

Uber Eats: how to use the contactless delivery option