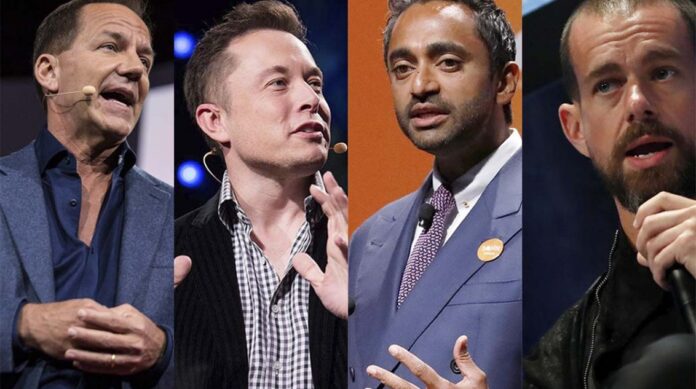 Although the number of billionaires we now know personally possesses cryptocurrencies does not exceed the fingers of both hands, it is possible for cryptocurrencies to expand their base in big fortune holders with the increasing popularity of the industry.

Elon Musk (Wealth: $ 24.6 billion)
Famous technology entrepreneur Elon Musk is a curious name for cryptocurrencies. Coming up with jokes about Dogecoin from time to time, Musk is hiding the BTCs given to him by a friend for a long time. It is known that Musk is currently personally holding 0.25 BTC. Their value is $ 2300 at today’s prices.

Until recently, Paul Tudor Jones, one of Wall Street’s senior figures, was not known to invest in cryptocurrencies. Jones announced in an interview with CNBC in recent weeks that he invested in Bitcoin. According to Jones, 1-2 percent of his assets are in Bitcoin. Also, Jones argues that Bitcoin is a hedge against inflation.

Jack Dorsey (Wealth: $ 4.7 billion)
Jack Dorsey, CEO of Twitter and Square, is one of the most famous Bitcoin supporters. Dorsey, who has been watching Bitcoin closely for many years, announced that it has been purchasing a certain amount of Bitcoin every week last year. Dorsey, who does not settle with this, also has 6-7 employees developing within the Square company for Bitcoin only. Dorsey did not explain how much Bitcoin he owned, but answered this question as “enough”.

Mark Cuban (Wealth: $ 4.3 billion)
The famous investor Mark Cuban, who owns the NBA team Dallas Mavericks, doesn’t actually like Bitcoin. In a statement he made earlier, Cuban said that he would prefer to buy bananas rather than Bitcoin. Cuban has only $ 130 BTC.

Micree Zhan (Wealth: $ 3.2 billion)
Micree Zhan is the co-founder of China-based cryptocurrency mining giant Bitmain. When Zhan founded Bitmain with Jihan Wu, it was 2013 and the price of Bitcoin was too low to compare with today’s level. It is not known how much Bitcoin Zhan has, but it is estimated to hold a considerable amount.

Jihan Wu (Wealth: $ 1.8 billion)
Jihan Wu is the founding partner and chairman of Bitmain, a China-based cryptocurrency mining equipment manufacturer. Founded in 2013 with Zhan, the company is fully in control of the mining industry today. It is stated that Wu, who holds approximately 20 percent of Bitmain, holds a large amount of Bitcoin.

Changpeng Zhao (Wealth: $ 2.6 billion)
Changpeng Zhao, CEO and co-founder of Binance, the world’s largest cryptocurrency exchange, said that he keeps all of his assets in cryptocurrencies. Zhao once stated that he mostly owns Bitcoin and Binance Coin. The story of Zhao’s start investing in Bitcoin is also interesting. In 2013, Binance CEO received a recommendation while playing poker in Shanghai with Bobby Lee, founder of the BTCC Bitcoin exchange. Lee told him to buy Bitcoin with 10 percent of his portfolio. Soon after, Zhao sold her home for $ 1 million and invested in Bitcoin. At that time, Bitcoin was trading at $ 600. Therefore, it can be said that Zhao has at least 1667 BTC.

Winklevoss Twins (Total fortunes: $ 1.8 billion)
The story of Winklevoss Gemini’s introduction to the cryptocurrency space is also striking. Winklevoss started their money by depositing their money in Bitcoin after winning the legal battle against Facebook founder Mark Zuckerberg. Then they founded the US-based cryptocurrency exchange Gemini. It is estimated that the twins have 1 percent of all circulating BTCs.

Brian Armstrong (Wealth: $ 1.8 billion)
Brian Armstrong, founder of Coinbase, one of the world’s largest crypto exchanges, is one of the names that met Bitcoin early. When he installed Coinbase in 2012, Bitcoin was only worth $ 10. It is not known how much BTC has Armstrong, who previously stated that he owned Ethereum more than Bitcoin.

Tim Draper (Wealth: $ 1 billion)
Tim Draper is a venture capitalist known as the “Silicon Valley Legend”. It is known for its investments in internet enterprises for years. Draper, a major Bitcoin supporter, bought more than 30,000 BTC in 2014. Draper, which also invests in some altcoins and blockchain companies, is one of the most personally owned BTC in the industry.

Chamath Palihapitiya (Wealth: $ 1 billion)
Chamath Palihapitiya, founder of Social Capital, a venture capital company, is one of Facebook’s top executives. He invested in Bitcoin as early as 2013. During his investment, Bitcoin was $ 80.

Michael Novogratz (Wealth: $ 1 billion)
Michael Novogratz, CEO of crypto investment company Galaxy Digital, has been in the cryptocurrency market for many years. Novogratz, which manages hundreds of millions of dollars of cryptocurrency funds, is also known to have thousands of BTC personally. In an interview with CNBC last month, he said that he has recently made additions to his BTC.

Games and games to spice up couples from a distance in...